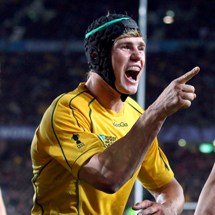 The Wallabies are currently in the middle of a play-making crisis ahead of their three-Test series with Jenkins’ Wales next month.

James O’Connor and Christian Lealiifano have both been ruled out of the one-off clash with Scotland and the triple header with the reigning Grand Slam Champions, while Kurtley Beale will be unavailable for at least part of the summer after undergoing shoulder surgery this week.

And with regular starter Quade Cooper short on game time having only just returned to action following a seven-month lay off because of an operation to repair his ACL, the Wallabies are running out of options in the pivotal position.

But while reporters and supporters alike are bemoaning Australia’s bad luck, Jenkins believes they already have the right man to step into the role in the shape of the experienced Barnes.

The 26-year-old has been on the Test scene since 2007 and was one of the star men when the Wallabies beat Wales in Cardiff last December and at the Bronze Medal match at the 2011 World Cup in October.

“Someone like Berrick Barnes can slot in at 10, no problem,” said Jenkins, who is currently skills coach for his country having won 87 caps as a player between 1991 and 2003.

“For me, he is one of their best players – he’s outstanding.

“I thought Barnes was outstanding against us when he went to 10 in the World Cup third/fourth play-off game. I find him a very influential player for them as he reads the game incredibly well.

“He’s a very good kicker and distributor and he understands the game very well. I would be surprised if he doesn’t play.”

Wales haven’t beaten the Wallabies on Australian soil for 43 years and Jenkins knows just how tough a challenge they face when they head Down Under a year before the Lions make the same trip.

With fellow former Lion Rob Howley in temporary charge following Warren Gatland’s accident at home in New Zealand back in April, Wales take on the Tri Nations Champions in Brisbane, Melbourne and Sydney on June 9, 16 and 23 respectively.

And although Wales have been boosted by injuries to Wallaby skipper James Horwill and their fly-half contenders, Jenkins is playing down suggestions that Australia will be an easier touch than they have been previously.

“The reality is that we are playing the second-best side in the world, as far as I'm concerned,” added Jenkins.

“I don’t think they are too far off the All Blacks at this moment in time. They play some fantastic rugby and have a lot of good players.

“Adam Ashley-Cooper can play at 15, so there are lots of players who can slot in. No matter what Aussie side takes the pitch against us, it will be a pretty good one.”