Triple Lions tourist Neil Jenkins has paid tribute to two fellow Lions ahead of their swansong this Saturday. [more] 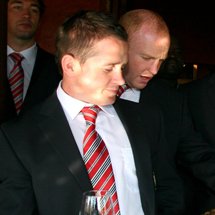 Triple Lions tourist Neil Jenkins has paid tribute to two fellow Lions ahead of their swansong this Saturday.

Shane Williams and Martyn Williams will both feature in this weekend’s clash between Wales and the Barbarians at the Millennium Stadium as they look to end their careers on a real high.

The two Williams’ are both retiring at the end of the season after a combined total of 186 (soon to be 187) caps for Wales, eight caps for the Lions and 28 years of international rugby.

Martyn has been named on the bench for Wales as he gets set to hit a century of caps for his country having missed out on a World Cup spot and a place in a third Grand Slam winning squad this spring.

The Cardiff Blues openside, who toured with the Lions in 2001, 2005 and 2009, has not yet been publicly discounted from touring Australia with Wales next month but it seems all but certain that Saturday will see his final appearance in professional rugby.

Shane called time on his own Wales career in December 2011 but will be in the Baa-Baas line up for another Cardiff send off.

The former IRB World Player of the Year has a knack of signing off in style having scored last-gasp tries in his final performances for Wales and the Ospreys, together with a brace of scores in his last appearance for the Lions.

Shane bagged a double when the Lions beat the Springboks 28-9 in Johannesburg in 2009 and followed that up by crossing the Wallaby line with the very last play of his Wales career six months ago.

Only last weekend he was celebrating the end of his regional career by adding two more tries to his tally in the RaboDirect PRO12 Grand Final, the second of which set up Dan Biggar’s title-winning conversion.

Wales skills coach Jenkins played alongside both men during his time with Wales and also featured with Martyn for the Lions 11 years ago.

The legendary fly-half, who kicked the 1997 Lions to glory from the unaccustomed position of full back, believes both men have left an indelible mark on the game.

“They are both amazing players,” said Jenkins, who toured twice with the Lions as a player and was part of Sir Ian McGeechan's coaching team in 2009.

“Both of them are legends of the game, and we should be very proud of them and what they have achieved.

“Martyn deserves his 100 caps, which is probably the minimum he deserves. He has been an outstanding player for Wales, the Lions, Pontypridd and Cardiff. He has pretty much done everything.

“And Shane just writes script after script. I hope he doesn’t score on Saturday, although I am sure he will be there or thereabouts!”

Wales have named three new caps for Saturday’s clash, with Harry Robinson, Liam Williams and Rhodri Jones all in the starting side.

And while Wales head into the fixture in good spirits following their 6 Nations success and a semi-final showing at the World Cup, Jenkins isn’t expecting an easy ride for his fresh-faced team against a Barbarians outfit that beat Ireland on Tuesday night.

“I think Saturday is going to be a pretty tough game,” added Jenkins.

“I played for the Barbarians, and while they maybe don’t take it too seriously in the week, as game time gets closer you want to back yourself.

“You back your own skills and they will be ready to rock come game time on Saturday.

“Even though the Barbarians play off-the-cuff rugby and it is very difficult to prepare for, we have to focus on ourselves and make sure we are ready.”

News
Previous story O’Connell out
Next story Year To Go…