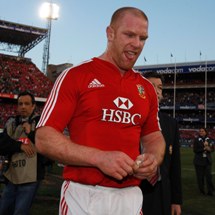 The Ireland second row has been ruled out of his country’s series with the All Blacks after failing to overcome a knee injury.

O’Connell had been rated as 50/50 to tour following Ireland’s squad announcement last week but the Munsterman hasn’t recovered quickly enough from the setback he suffered against Ulster early this month.

The man who led the Lions in South Africa three years ago had been undergoing extensive rehabilitation in London with the hope of being able to play some part in the three Tests against the reigning World Champions but he will now continue his recovery at home rather than Down Under.

Connacht’s Mike McCarthy has been added to the squad in place of O’Connell, while Paul Marshall has taken over from Boss in joining Eoin Reddan and Conor Murray as Kidney’s chosen No9s.

Doubts still surround the fitness of regular starter Mike Ross after the Leinster prop picked up a grade one hamstring tear that is expected to take a fortnight to heal but Ulster flanker Chris Henry is fit to tour.

Ross is touch and go to make the first Test in Auckland on June 9 but he is expected to be available for the second international in Christchurch a week later and the final rubber in Hamilton on June 23.