Australian great George Gregan insists there isn't much to choose between the Wallabies and All Blacks. [more] 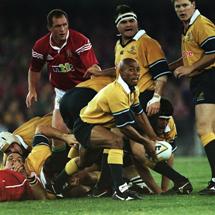 Australian great George Gregan insists there isn’t much to choose between the Wallabies and All Blacks.

For just the second time in the last five tours, the Lions won’t be facing the reigning World Champions when they head to Australia next summer.

New Zealand took that honour at last year’s World Cup, beating their trans-Tasman rivals in the semi-final as they tasted global glory for the first time since 1987.

But while the All Blacks hold the William Webb Ellis trophy and currently sit at the top of the world rankings the Wallabies aren’t too far behind.

A first Tri Nations crown in a decade showed just how good Robbie Deans’ men can be, especially as the defining triumph came against the All Blacks themselves in Brisbane back in August.

And with the chance to build their preparations for the newly extended Rugby Championship with a summer series against Scotland and Wales next month, Gregan sees no reason why the Wallabies can’t win back the Bledisloe Cup for the first time since 2002 later this year.

"I think we can definitely bridge the gap: the gap was pretty much bridged to a pretty big degree last year," said Gregan, who helped the Wallabies to a series win over the Lions in 2001.

"It wasdisappointing in the semi-final of the World Cup but there's not too much of a gap between the two teams.

"Obviously they lost a Test match in a Tri Nations series in Auckland, but I think they've shown that they can beat this New Zealand team in the space of the last 12 months. You just have to look back to that final Tri Nations game at Suncorp.

"I think the New Zealand team would be aware of that, but nothing beats doing it consistently, so that's the challenge ahead. If they do it consistently they win that big cup back (the Bledisloe), which we haven't had for a long time.

"Everyone talks about it, but that is the result of a strong consistent performance, which you need against any All Black team."