It's now exactly a year until the Lions play their first match on the 2013 tour of Australia and Hong Kong. [more] 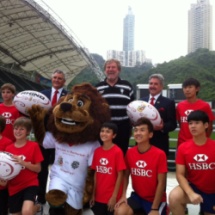 It’s now exactly a year until the Lions play their first match on the 2013 tour of Australia and Hong Kong.

Britain and Ireland’s elite take on the Barbarians in Hong Kong on June 1 2013 as they look to kick off their 10-match adventure in style.

The Lions’ first-ever clash with the Baa-Baas is also their first fixture in Asia having previously played in Europe, Australasia, South America, North America and the South Pacific.

The Lions are then set to take on all five Australian Super 15 franchises during their time Down Under, with the tour geared towards a three-Test series with the Wallabies that starts on June 22 next year.

The series begins in Brisbane, moves to Melbourne and ends in Sydney on July 6, while the other Australian venues to host the world’s most famous touring team are Perth, Newcastle and Canberra.

But while the 10 tour fixtures are set in stone, the make up of the Lions squad will remain up in the air until spring 2013.

International and domestic fixtures now start to take on added connotations as individual players begin to stake their claims for inclusion among the latest pride of Lions, while journalists and supporters up and down the country are already compiling their own Lions XV.

This summer’s series between Wales and the Wallabies will offer a fascinating insight to some potential match ups in a year’s time, while Scotland also face Australia in a one-off Test this coming Tuesday. England head to South Africa to face the Lions’ most-recent opponents, with Ireland’s contingent of Lions hopefuls looking to boost their reputations against reigning World Champions the All Blacks.

No doubt the next 12 months will fly by and we’ll all be caught up in another wonderful Lions adventure before we know it but what do you remember about the last Lions’ outing?

The most recent Lions fixture took place in July 2009 and resulted in a stunning 28-9 success over the Springboks in Johannesburg. It was the Lions’ first Test win in eight attempts and came on the back of a heartbreaking 28-25 loss in Pretoria just a week earlier.

Despite the disappointment of series defeat following the last-gasp loss at Loftus Versfeld and a 26-20 reverse in Durban, the Lions bounced back to ensure the next crop of stars will travel to Australia on the back of a morale-boosting triumph.

The Lions were simply outstanding at Coca Cola Park as they produced a performance that left head coach Sir Ian McGeechan a very proud man and finally brought some reward for their earlier efforts.

Shane Williams finished his Lions career in style with a brace of tries, while fellow wing Ugo Monye also touched down as the tourists equaled their biggest ever win over South Africa. Welshman Williams touched down twice in the space of eight minutes midway through the first-half as the Lions opened up a 15-6 lead at the break.

Jamie Heaslip’s powerful burst set the platform for Williams’ first score on 25 minutes after Stephen Jones and Morne Steyn had traded early penalties. A Simon Shaw turnover then allowed Mike Phillips to feed Riki Flutey, with the England centre collecting his own chip ahead and then flicking the ball on to Williams who raced home from the edge of the 22 with seven minutes of the half left to play.

Despite Shaw having been yellow carded for kneeing Fourie du Preez four minutes after Williams’ second score, the Lions came within inches of a third try just after the restart. Tommy Bowe and Stephen Jones both went close before Andrew Sheridan was penalised for holding on with the line within his reach as Bok scavengers Juan Smith and Heinrich Brussow proved their defensive worth.

But it didn’t take too much longer for the Lions to effectively put the game to bed as Monye raced home from close to 90 metres with 54 minutes on the clock. Zane Kirchner’s floated pass was intended for Wynard Oliver as the Boks looked for a try of their own but Monye picked it off perfectly before showing the covering defence a clean pair of heels to make amends for a couple of missed chances in the first Test.

Of the matchday 22 that featured in that final test in 2009, nearly a third have now retired. Injury forced Phil Vickery, Joe Worsley, John Hayes, David Wallace and Harry Ellis out of the sport prematurely while Shane Williams and Martyn Williams are calling time on their stellar careers this month.

The matchday squad from the last Lions test against South Africa:

But while a large percentage of the players who won the day for the Lions last time out may not be heading to Australia for another outing, plenty of fans who travelled to South Africa are already looking forward to more of the same in Oz.

Supporters are snapping up our official tours and thousands have already booked. There is something unique about touring with the Lions and, with Lions Rugby Travel, you will be even closer to the action than ever before. With exclusive access to team training sessions, special events, and Lions supporters villages, you really will be at the heart of the Lions’ den!

To join the Lions and book online, simply click here

If you are looking to get out to Australia to watch the Lions take on the Wallabies, Lions Rugby Travel is there to help. Our team of Aussie specialists are on hand to make your touring experience everything that you are looking for and more.