It may be disguised as Australia v Wales, but Saturday's Test in Brisbane is much more than that. [more] 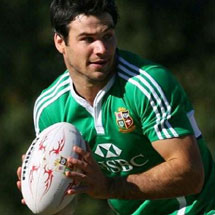 It may be disguised as Australia v Wales, but Saturday’s Test in Brisbane is much more than that.

It will be another battle for the No 1 spot in the world pecking order of scrum halves and could also be the first of many meetings between Will Genia and Mike Phillips. Their likely three clashes this month will be a precursor to next year’s British & Irish Lions 125th anniversary tour.

Phillips is the incumbent Lions scrum half having started in all three Tests in South Africa in 2009. But the Bayonne star has yet to taste success against the Wallabies in five outings against the, the latter two in opposition to Genia.

That’s something he wants to change over the next three weeks as Wales attempt to extend their winning sequence this year to seven and more games in a row – and pick up their first victory over a Tri Nations side away from home since 1987.

And as far as Phillips is concerned it is Brisbane or bust for the reigning Grand Slam champions as they seek to rise even further up the world rankings at the start of Lions year..

“The first Test is so important – nail that one and you get some momentum. We have to give everything we’ve got in Brisbane and then push on from there,” he said.

“This series is a massive opportunity for us and we know how huge it would be if we could get a couple of wins. We have very high standards and everyone is driving each other on.

“It’s all about winning and we want to carry on in that way and move to the next level. We want to push on and get the next big scalp.

“We’re up against one of the best sides in the world and we respect their place in world rugby. But we are in good shape to hopefully challenge them over the three Tests in the next few weeks.”

Phillips, Wales’ second most capped scrum half of all time behind Dwayne Peel, will be a key figure in the push for a first Welsh win over a Tri Nations team away from home since 1987 against Australia in the third place play-off game at the World Cup.

And his battle against Aussie ace Will Genia will be one of the highlights of the series a year out from the British & Irish Lions 125th anniversary tour of Australia.

Genia has enjoyed four straight wins over Wales and joined forces with Quade Cooper to spearhead Queensland Reds to Super 14 glory last summer. He has had to play without Cooper for most of this season because of the knee injury his half-back suffered against Wales in the Bronze Final at the World Cup, but the two could be back in harness for the series against Wales.

“Will Genia is a real catalyst for them and he dictates the way they play. He is a major threat for them and pulls the strings for them,” admitted Phillips.

“But throughout the side they have some wonderful ball playing forwards and their backs can cut the line. It means our defence will have to be massive as they have threats all over the park.

“It really is an exciting challenge for us and it is one we want to match up to. We’ve all enjoyed the experience of winning in a Welsh jersey this year and coming on the back of a Grand Slam campaign this is a very exciting trip.”