Debuts for Marler and Johnson

England have named two new caps in their starting side to face South Africa. [more] 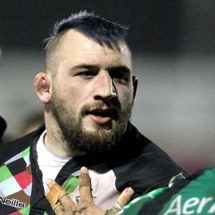 England have named two new caps in their starting side to face South Africa.

Ben Foden moves to the left wing in place of David Strettle, with Mike Brown starting at full back for Saturday’s first Test (kick-off 4pm BST).

Ben Youngs takes over from Lee Dickson at scrum-half in another change from the convincing win over Ireland in the last game of the RBS 6 Nations, while uncapped London Irish centre Jonathan Joseph is among the replacements.

"Tom and Joe have had great seasons at their clubs and have worked really hard to get this chance. Both are in great form and have really impressed in training,” said England head coach Stuart Lancaster.

"Equally, Mike Brown has been outstanding for Harlequins. By moving Ben to the wing we retain his strike power and aerial skills. We can utilise not only Mike's attacking and defensive assets, but also call on his left-footed kicking game.

"We have made no secret of how tough this series will be but it is an opportunity we are looking forward to and I am confident that we can perform."

Owen Farrell is chosen ahead of Saracens team-mate Charlie Hodgson at fly-half, while Brad Barritt and Manu Tuilagi form a powerful centre partnership and Chris Ashton will be looking to build on his try hat-trick in the recent win over the Barbarians.

Dylan Hartley and Dan Cole join Marler in the front row, with Mouritz Botha and Geoff Parling selected at lock and captain Chris Robshaw packing down alongside Johnson and Ben Morgan in the back row.

Bath hooker Lee Mears is the only Lion in the matchday 22 after he was named on the bench behind Hartley.

England face the Springboks in Durban – the venue of the Lions’ narrow first-Test defeat in 2009 – before heading to Johannesburg and Port Elizabeth on June 16 and 23 respectively.

The Boks have named three new caps of their own in their starting line up, with second row pairing Eben Etzebeth and Juandre Kruger and Sharks flanker Marcell Coetzee all handed debuts by new coach Heyneke Meyer.

Veteran centre Jean de Villiers has been selected as skipper, as Meyer names seven of the side that began the opening rubber with the Lions in the same city three years ago.

JP Pietersen, Bryan Habana, Pierre Spies, Tendai Mtawarira and Bismarck du Plessis are all included, while Frans Steyn starts at inside centre having begun the Lions series at full back.