Wales have made four changes to their starting XV from the side that clinched Grand Slam glory for Saturday's clash with Australia. [more] 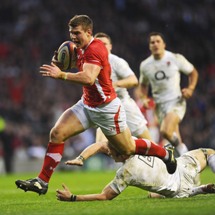 Wales have made four changes to their starting XV from the side that clinched Grand Slam glory for Saturday’s clash with Australia.

Caretaker coach Rob Howley has stuck with the vast majority of the side that saw off France in Cardiff back in March but a trio of Lions miss out.

Scarlets hooker Matthew Rees, who captained Wales in Saturday’s win over the Barbarians, is overlooked in favour of clubmate Ken Owens, Jamie Roberts is absent through injury and is therefore replaced by Scott Williams, and second row Alun Wyn Jones is named on the bench having missed initial training to attend his sister’s wedding.

Fellow lock Ian Evans is unavailable as he is getting married this weekend so Howley has selected a new partnership in the boiler-house in the form of Luke Charteris and Bradley Davies.

There are four Lions in the first XV and four more among the replacements as Wales look to follow Scotland’s lead in beating the Lions’ next opponents at the Suncorp Stadium in Brisbane.

"Australia will be disappointed after their defeat to Scotland, but that will make them all the more dangerous for us,” said Howley, who is expecting a backlash from David Pocock and co.

"The Wallabies are still the second highest placed side in the world rankings and we are playing them in their own back yard.

"We all appreciate the enormity of the task ahead of us, the long-term stats don't make happy reading for the Welsh against the Wallabies, and as recently as this season we have two losses racked up against Australian opposition and we are determined to stop that trend.

"We have come through a good 6 Nations, we have competition for places and we believe we have got an opportunity on the weekend.

"We are playing with confidence, we are playing good rugby and we are really looking forward to Saturday evening."