Australia coach Robbie Deans has made wholesale changes to the side to face Wales this weekend. [more] 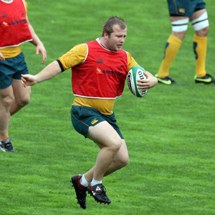 Australia coach Robbie Deans has made wholesale changes to the side to face Wales this weekend.

Deans has ditched nine of the XV that lost 9-6 to Scotland on Tuesday as the Lions’ next opponents look to bounce back in Brisbane.

Only three of forwards and the same number of backs survive from the shock reverse to the Scots in Newcastle, with Deans recalling a host of front-line players.

“You will see fresh legs and a fresh mindset. We need to make some progress around the elements of cohesion that were evidently lacking against Scotland,” said Deans.

“There are no new injury worries and it wouldn’t surprise me if the Welsh adapt their tactics to make the most of us having played two games in a week.

“Our plans for the weekend started the moment the final whistle blew on Tuesday night and we know there are significant areas of our game that will have to improve.

“We knew what this week was going to be like and we gave a lot of thought to our combinations. Even so, we came up short in the first instance.

“If any of the Australian players had forgotten what Test rugby is like it is looming large in their minds now. The players are back in the groove of Test rugby and face a massive game on Saturday.”

Highly-rated loose head Benn Robinson makes his first appearance since November 2010 having been sidelined with a serious knee injury, while fellow propSekope Kepu also returns from an eye injury that ruled him out of the Bronze Medal clash at the 2011 World Cup and the two-match autumn tour.

Tatafu Polota-Nau completes an all-Waratahs front row as Deans names nine members of the starting XV that beat Wales in Cardiff back in December.

Reds lock Rob Simmons is recalled in place of the Sitaleki Timani after making a decent impact off the bench in midweek and veteran No8 Wycliff Palu returns to the back of the pack as Scott Higginbotham moves to blindside flanker.

In the backline, the versatile Adam Ashley-Cooper takes over from Luke Morahan at full back and Rob Horne and Pat McCabe form a new centre partnership ahead of Anthony Fainga'a and Mike Harris. Joe Tomane is a late injury withdrawal so debutant Cooper Vuna comes is called up to take the right wing spot.

David Pocock continues to captain the side in the absence of injury victim James Horwill, while uncapped Brumbies scrum-half Nic White could win his first cap if called upon from the bench.