Chris Ashton is hoping for a more memorable clash against South Africa on Saturday. [more] 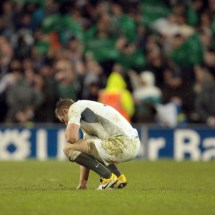 Chris Ashton is hoping for a more memorable clash against South Africa on Saturday.

The last time the England star faced the Springboks he was knocked out in a sickening collision with Victor Matfield. Ashton continued the match but has little memory of the 27-11 Twickenham defeat.

He will once again line up against the Lions' last opponents at Kings Park tomorrow and is well prepared for another physical battle.

"I got knocked out in about the eighth minute,'' recounts Ashton. "I did play on but I didn't have much of an effect. I didn't play well and I didn't really know what was going on.

"I am thankful for the experience though. I do know what to expect now. It was a hard day at the office."

Ashton will have the daunting task of lining up against star wing Bryan Habana, who twice featured against the Lions in 2009.

The Saracens-bound wing rates Habana as the best in the world and reckons it will challenge just how much his defensive game has improved.

"He is the best winger in the world. He has been for so long," added Ashton.

"I will have my work cut out against him in defence and under the high ball because that is how they like to play the game.

"It is the perfect test for me to prove myself in defence as well as attack."

The battle between the exciting duo will be one of the most fascinating sub-plots of the three-Test series.

Ashton has vowed to ditch his controversial "Ash Splash" try-scoring dive but admits he may just reserve it for an exceptional efforts.

"Maybe if I score a full length of the pitch try this weekend and it was the match winner… maybe.

"I had a conversation with Stuart right at the start. His opinion was right time, right place.