Stephen Donald has warned Ireland that they must beat New Zealand on Saturday or face a humiliating black wash. [more] 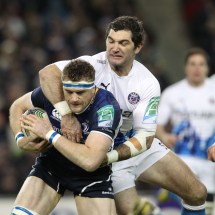 Stephen Donald has warned Ireland that they must beat New Zealand on Saturday or face a humiliating black wash.

Declan Kidney's men kick-off their summer series with the All Blacks in Auckland tomorrow morning.

And Donald insists the first Test is the best chance Ireland have of securing a first ever victory over New Zealand.

"New Zealand will be pretty confident going into the match," said the World Cup winning fly-half.

"They have a new head coach but Steve (Hansen) has been involved in the set-up for a long time, there's a lot of experience and it should be a seamless transition.

"The first game will be Ireland's big opportunity. But if things don't go well in that first game I would be concerned, it could be a very long tour."

The former Chiefs fly-half came up against Ireland's Leinster contingent during the Heineken Cup with Bath.

The West Country giants were edged out by Leinster at the Rec before being viciously disposed as Joe Schmidt's men ran riot in Dublin.

Donald reckons Leinster would provide a match for most international teams but reckons Heineken Cup form will again fail to transfer to the Test arena.

"Leinster are an outstanding provincial rugby team – they're almost a full international side," added Donald.

"But as we have seen in the past there's not always a straight transition from Heineken Cup to international rugby.

Ireland can take confidence from Leinster, and also Ulster reaching the final, but how much that will count against the All Blacks I don't know.

"Everyone is in pretty good nick back home and there's some great youngsters coming through, who are in the squad.

"With the exception of the Blues, all the teams are doing well in the Super 15. They've been having regular camps with the national set-up and will be raring to go."