Ireland slipped to a crushing 42-10 defeat to New Zealand on Saturday morning. [more] 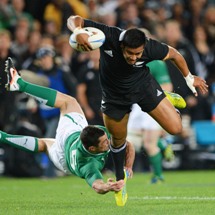 Ireland slipped to a crushing 42-10 defeat to New Zealand on Saturday morning.

The All Blacks ran in five tries in a convincing win in Auckland, with 21-year-old wing Julian Savea scoring a hat-trick on his senior debut.

Adam Thompson and Conrad Smith also crossed in New Zealand’s first game since lifting the World Cup back in October, while Dan Carter added four conversions and three penalties for a personal tally of 17 points.

Fergus McFadden claimed a consolation try for the Irish when they trailed 30-3 but Declan Kidney’s men were second best against an impressive All Blacks outfit in Steve Hansen’s first game in charge.

Ireland started brightly at Eden Park as they looked for another shock result in New Zealand’s biggest city having beaten Australia there in the group stages of the World Cup.

But the visitors failed to turned pressure into points and the game was as good as over by the halfway mark as the All Blacks took a 23-3 lead into the break.

Ireland battled hard in the second period but a first-ever win over the All Blacks was never really on the cards.

"We started okay but in fairness to them they played with a very fast tempo and we didn't slow their ruck ball down enough," said Ireland captain and Lions legend Brian O'Driscoll.

"When they're playing that way they're difficult to defend against – you're chasing shadows a bit.

"A huge amount to work on but we've got two more chances, two more cracks at it."

Ireland now head to Christchurch for the second of three Tests next Saturday.