Wales have been dealt a big blow with the news that Toby Faletau will be flying home from Australia after breaking a bone in his hand. [more] 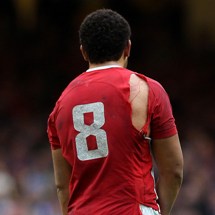 Wales have been dealt a big blow with the news that Toby Faletau will be flying home from Australia after breaking a bone in his hand.

The Dragons No8 completed the full game at Suncrop Stadium in Brisbane but was diagnosed with the broken bone after the game. His place in the tour party has been taken by the Melbourne Rebels stand-in skipper Gareth Delve.

“We are a game down, but we still have it all to play for in this series and Tuesday night’s game against the Brumbies is the perfect opportunity for this squad of players to move on,” said Wales caretaker coach Rob Howley.

“We have one or two bumps and bruises and we are expecting players to ‘back-up’ after playing a tough Test match and go out there 72 hours later and play for their country. But that is exactly what touring is all about.

“It will be a test of character for the likes of Luke Charteris, James Hook and Alun Wyn Jones, who all made significant contributions on Saturday.”

While Faletau’s departure will be a major blow to Wales’ chances of  hitting back in the three-match series with the Lions’ 2013 opponents, they still have the highly experienced Ryan Jones to play in the middle of their back row and now the 11-times capped Delve to fall back on as well.

Delve, who led the Rebels against the Brumbies in their Super Rugby clash nine days ago, is included among the replacements for Tuesday night’s game in Canberra.

Joining him on the bench will be Ospreys lock Ian Evans, who arrived in Australia in the early hours of Sunday morning after flying in from his wedding in Greece.

Luke Charteris is the only player from the starting XV in the first Test who will line-up again in Canberra against Australia’s leading Super Rugby side at present.

Wales have played ACT or the Brumbies three times in the past, losing in 1978 and 1996.

Hooker Ken Owens, outside-half Rhys Priestland and wing Alex Cuthbert, who all started at the weekend, are included among the replacements.

Beck picked up his first cap in Brisbane when he replaced Scott Williams and set-up a try for Alex Cuthbert with his first touch.

Liam Williams, Harry Robinson and Rhodri Jones, who all gained their first caps in the win over the Barbarians, also get a start in Canberra.

Ospreys skipper and 2009 Lions tourist Alun Wyn Jones, who led his side to victory over European champions Leinster in the RaboDirect PRO12 final last month, will captain the team.