John Barclay will miss Scotland's clash with Samoa on Saturday after returning home to plan his imminent wedding. [more] 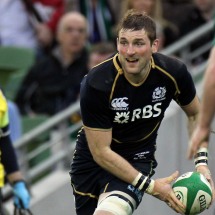 John Barclay will miss Scotland’s clash with Samoa on Saturday after returning home to plan his imminent wedding.

Barclay was a major presence in Scotland's previous triumphs over Australia and Fiji in the southern hemisphere but he has been released from the tour early.

"He has got his wedding a week on Saturday and we have always said that we were prepared to release him after two games," said Scotland head coach Andy Robinson.

"There are two reasons for this. One is the difficulty of travel from Samoa and the other is the risk of injury. Obviously, we have got plenty of back-row cover."

Richie Vernon and Stuart McInally are the front-runners to fill Barclay's shirt in the back-row as Scotland look to complete their unbeaten summer.

The Scots are continuing to assess a number of injuries with Lions prop Euan Murray a major doubt for the final Test match of their summer schedule.

"Injury-wise, we have got shoulder bruising to Al Kellock, Max Evans and Ryan Grant," added Robinson.

"Euan Murray has twisted his knee and Al Strokosch has a calf irritation.

"All in all, we seem to have shaped up pretty well. We have got to wait and see on Euan, but we have got cover in his position. Geoff Cross did well when he came off the bench and there is more cover in Moray Low. We do expect Ryan to be fit."