Monye gets his chance

Ugo Monye will get his chance to push for another shot at the Springboks this week. [more] 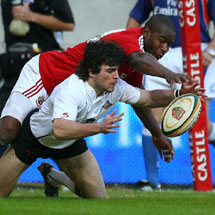 Ugo Monye will get his chance to push for another shot at the Springboks this week.

Monye has been handed his first England tour appearance against the South African Northern Barbarians in Potchefstroom as the visitors look to bounce back from Saturday's second Test defeat.

Monye has recovered from a tight hamstring and will line up at Profert Olen Park in a side again captained by his Harlequins team-mate George Robson. Three years ago Monye was a Test wing in the British & Irish Lions Test series against the Springboks.

Head coach Stuart Lancaster has made six personnel changes from the side that started against the Southern Barbarians last Wednesday. Monye is joined in the back-line by Lee Dickson at scrum-half in place of Danny Care, Nick Abendanon, who takes over from Alex Goode at full back, and Christian Wade, who switches to the right wing for George Lowe.

Up front, there are first tour starts for Tom Youngs and Jamie Gibson in the front and back rows, while Ben Morgan comes in at No8 for Thomas Waldrom. Karl Dickson, fresh into the squad as an injury replacement for Ben Youngs, will be on the bench.

“We have talked today about finishing the tour strongly this week and these players have a great opportunity to do this in the second of the two midweek games. There are still selection decisions to be made for Saturday but the players’ focus will be on putting in a strong cohesive team performance and building on on the positives from last week, but also learning the lessons," said Lancaster.

“Ugo is the only player yet to have any game time and I am delighted that he will have a run out to cap what has been a fantastic club season for him. It’s also great to have Jonny May and Karl Dickson here and I am looking forward to seeing how they perform.”