Back to the Boks

Exactly three years ago today, June 20, the Lions began an enthralling Test series with the Springboks over in South Africa. [more] 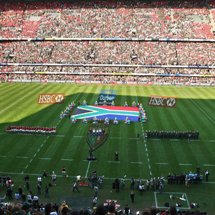 Exactly three years ago today, June 20, the Lions began an enthralling Test series with the Springboks over in South Africa.

A truly incredible yet ultimately heartbreaking experience started in Durban, the scene of the Lions’ historic series success back in 1997.

Unfortunately for Sir Ian McGeechan and co, history failed to repeat itself as the Boks banished memories of Jerry Guscott’s last-gasp drop goal with a 26-21 win at the ABSA Stadium.

A second-half comeback wasn’t quite enough to take the points in the opening rubber as the hosts just about held their nerve after the Lions had found themselves 19 points down with 12 minutes remaining.

The Lions’ substantial late rally showed what Britain and Ireland’s elite were capable of and went some way to pointing towards the drama that would follow when the series was decided in Pretoria a week later but it was a case of too little too late after a slow start.

There were a number of standout individual performances, with Tom Croft bagging a brace of tries on his Lions debut having initially missed out on selection for the tour and centre partners Brian O’Driscoll and Jamie Roberts regularly testing the South African defence, yet it was the Boks who were the more bullish after the final whistle.

Tries from John Smit and Heinrich Brussow, together with 13 points from the boot of Ruan Pieanaar and three from Francois Steyn, eventually proved enough for the hosts as they set the platform for a 2-1 series win.

Successive waves of attacks from right to left led to skipper Smit powering over from close-range on five minutes to give his side an early advantage as the Boks dismissed suggestions that they would be undercooked having played very little rugby together in the first six months of the year.

The Lions thought they had hit back in spectacular fashion just moments later, though, as Ugo Monye dived over in the left-hand corner. The Harlequins and England wing appeared to have supplied a fine finish after taking O’Driscoll’s pass 15 metres from the line as the Lions found space on the blindside of a scrum.

Referee Bryce Lawrence was unable to confirm the try so he instead asked television match official Christophe Berdos to give his verdict and, when it finally arrived, it was one that disappointed a passionate Lions support.

Monye was adjudged to have been held up by the outstretched arm of Springbok centre Jean de Villiers meaning the Lions remained seven points behind. To make matters worse, the Boks were awarded a 22-metre drop out rather than having to defend a five-metre scrum.

Instead of being back on level terms or just two points behind, the Lions soon found themselves 13-0 down with a quarter of the match played. A missed penalty attempt from Stephen Jones was sandwiched by successful kicks from Pienaar and Steyn as the Boks showed just how clinical they could be when gaining any sort of footing in the Lions half.

Despite such a disappointing start to their first Test series in four years, McGeechan’s men maintained their composure and finally gained some reward for their early ingenuity. The much-talked about midfield make up of Roberts and O’Driscoll did the damage, with Croft on hand to provide the telling touch as the Lions registered their first try with 21 minutes on the clock.

Roberts burst straight through the tackles of Adi Jacobs and debutant starter Brussow after taking a pass from Stephen Jones on the South Africa 10-metre line; O’Driscoll’s supporting angle took him away from the covering Springbok defence; and when he was finally brought down by JP Pietersen, the Ireland captain had the presence of mind to offload to Croft five metres from the Bok line.

Tom Croft scored twice for the Lions – once in either half

After Jones had converted to close the gap to 13-7, a second try almost arrived for the Lions just five minutes later but Tommy Bowe was prevented from claiming his fifth score of the tour after Lee Byrne was pulled up for crossing as O’Driscoll drifted across field.

Steyn dragged a long-range penalty wide of the left post as the Lions stayed within a single score but two successive three-pointers from Ulster-bound Pienaar saw the Springboks establish a daunting 19-7 lead at the half-time interval. And if the Lions had plenty to do with 40 minutes left on the clock, they had an even greater task facing them with just five minutes of the second period played.

The re-introduction of laws preventing the pulling down of a maul had had been talked about as a possible advantage for the visitors but it was the South Africans who made the most of the dismissal of one of the game’s most-contentious Experimental Law Variations.

Having first won a penalty after driving fully 20 metres, the Boks continued to maul their way forward, with the Lions unable to bring a halt to their momentum. The home side pushed their way over the try line, with openside Brussow emerging from the bottom of a pile of bodies to further dent the Lions’ chances of working their way back into the fixture. Pienaar continued his impressive form with the boot and his conversion left the Lions chasing a seemingly insurmountable 26-7 deficit with 33 minutes remaining.

Such a margin may have eventually proved a bridge too far for the Lions but they somehow worked their way back into contention as the Boks made numerous substitutions and took their foot off the pedal seemingly thinking the job was done.

The immense character and pride associated with the tourists shone through as the game neared its conclusion, with the Lions dominating their opponents in every single facet of play in the final quarter of an hour. And when Croft sliced through for his second try after 68 minutes the Lions support began to sense something special.

Again Roberts and O’Driscoll were the catalysts for Croft’s moment of glory, with the Welshman making yards before his Irish colleague put the Leicester flanker through a sizeable hole five metres out. Stephen Jones then kicked the conversion to bring the men in red back to within two scores and the Lions began to believe once more.

Having earlier seen the ball knocked from his grasp as he stretched for the try line, Mike Phillips then pounced from the back of a ruck seven minutes after Croft's second score to reignite dreams of victory. The Ospreys and Wales scrum-half dummied to move play wide before darting backing inside for the Lions' third try of the match as the home support at the old King’s Park suddenly became more than a little wary.

Belief in the Lions' cause was beginning to turn to anticipation and hopeful expectation. Suddenly the Lions were no longer no hopers. Instead they were gaining the kind of momentum that suggested an outrageous victory might just be on the cards. A third successful conversion from Stephen Jones closed the gap to just five as the Lions sensed victory against a demoralised South African side clearly on the backfoot.

Unfortunately, five points remained the gap between the sides when Lawrence signalled the end of proceedings after Andries Bekker won a lineout as the hooter sounded and Ricky Januarie gratefully cleared to touch.

It was a cruel conclusion to a frantic final 20 minutes for the Lions. Another few moments and they may have completed the turnaround.

But sport is full of ifs, buts and maybes and the Boks weren’t at all fussed by the uncomfortable nature of their triumph. A win is a win at the end of the day and, while the Lions were left thinking what might have been, the world champs were halfway to avenging the lingering pain of their series defeats of 1974 and 1997.