England have changed more than a third of their team for the third Test with South Africa. [more] 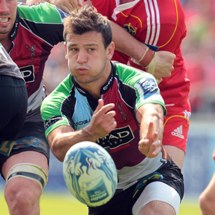 England have changed more than a third of their team for the third Test with South Africa.

Head coach Stuart Lancaster has made a total of six alterations to his starting XV as England look to avoid a series whitewash in Port Elizabeth.

Harlequins scrum-half Danny Care makes his first start since the summer of 2011 after missing the World Cup through injury and then finding himself suspended from the RBS 6 Nations squad after being caught drink driving.

Care, who has enjoyed a stunning domestic season with newly-crowned Aviva Premiership Champions Harlequins, jumps above Lee Dickson in the pecking order to replace the injured Ben Youngs.

Saracens full back Alex Goode is handed his first start for his country as Ben Foden switches to the left wing in place of David Strettle, while Thomas Waldrom achieves the same feat after replacing Ben Morgan at No8.

James Haskell, Tom Palmer and Alex Corbisiero all return to the side at the expense of injured captain Chris Robshaw, Mouritz Botha and Joe Marler, with Botha and Marler dropping to the bench.

Dylan Hartley captains the side in the absence of Robshaw, while Toby Flood wins his 50th cap as he continues ahead of Owen Farrell at fly-half.

"Danny Care has bided his time in a very competitive position, knuckled down and deserves his chance, as has James Haskell,” said Lancaster, who names Brad Barritt on the bench after the South African-born centre needed stitches in a cut eyeball a fortnight ago.

"I am really pleased for Alex (Goode). He has worked hard in training and has been pushing Mike Brown and Ben Foden close, so we are looking forward to him bringing his footballing skills to this Test.

"We felt that the pack got some momentum in the second half last week so we have gone for Alex (Corbisiero) and Tom, but I am sure Joe Marler and Mo Botha can make an impact from the bench.”

After losing the opening Test 22-17 in Durban, England were downed 36-27 in Johannesburg last week as they saw the three-match series slip by.

They have since bounced back by putting 50 points on the South Africa Northern Barbarians on Tuesday night – their second midweek win of the tour – and Lancaster is now hopeful his men can go the extra mile by beating the Boks in their own backyard for the first time since 2000.

"The guys did the shirt proud in Potchefstroom on Tuesday and I have no doubt that the 22 involved on Saturday will rise to this final challenge as we look to end this almost 12-month season on a high," added Lancaster.