Stuart Lancaster reckons England's brutal tour of South Africa will be of huge importance to their development. [more] 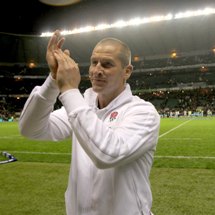 Stuart Lancaster reckons England’s brutal tour of South Africa will be of huge importance to their development.

The Red Rose crashed to a 2-0 series defeat to the Springboks but restored pride with a 14-14 draw in Port Elizabeth on Saturday.

Lancaster was disappointed with the indiscipline of his young side, who were also left to rue missed shots at goal.

But he reckons there are plenty of positives to come from the hugely physical tour.

“It has been a fantastic opportunity to take a wider group of players and work with them,” said Lancaster.

"That has been the real benefit of the tour, getting a real understanding of the strengths and areas we need to look at to go forward.

"We should be getting to a point as a team where we are competitive and winning every game has got to be the mindset.

"We have now got a team of young players and experienced players coming through together in an environment they enjoy and the culture is strong.

“I took a 42-man squad, injuries meant 47 players figured in our five games, 29 in the three Tests.

“The way they stood up to the Springboks barrage augers well for their visit to Twickenham in November.

"But we didn't win the first two Tests and we drew the third – that ultimately means disappointment from my point of view.

Lancaster blooded a host of youngsters in South Africa and names a new 32-man elite squad in 10 day’s time.

“You can see that there’s been a changing of the guard, a new generation coming through," added Lancaster.

"The strongest tool I have is the power of selection. The players now know that and are aware that no one has a God-given right to a shirt."