Sean O'Brien is a doubt for Ireland's autumn series. [more] 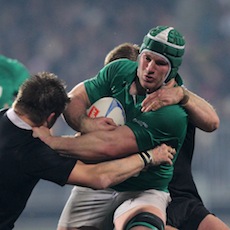 Sean O’Brien is a doubt for Ireland’s autumn series.

The powerful flanker, one of Ireland’s stand out performers throughout the RBS 6 Nations and recent tour of New Zealand, requires hip surgery.

"Sean is having some keyhole surgery on his hip to repair some cartilage damage within the next week or so, and the recovery period for this type of operation is 13 to 15 weeks," said Ireland manager Mick Kearney.

"It means it could be up to four months. Obviously it's going to make him doubtful for November.”

O’Brien is expected to make a full recovery but the news is a major blow to the Leinster star, who has been tipped for a place on the Lions tour to Australia next summer.

He will return to action ahead of the autumn series, where Ireland face South Africa and Argentina, and will hope to be firing on all cylinders in the Six Nations

"Like any operation there is some risk attached to it but the medics feel he will make a full recovery and that he will certainly be back towards the end of October and he should be back playing Heineken Cup rounds three and four in December," added Kearney.

"Dave has had a similar kind of procedure done and Rhys I think is having a similar type of procedure. It seems to be a more common type of injury than heretofore. I'm not sure the reason why. People are a bit mystified by it. Sean will make a full recovery – certainly that's the medical opinion."