Lions hopeful Toby Faletau admits he has a fight on his hands to wrestle the Wales No.8 jersey from former tourist Ryan Jones. [more] 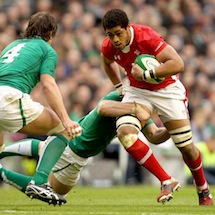 Lions hopeful Toby Faletau admits he has a fight on his hands to wrestle the Wales No.8 jersey from former tourist Ryan Jones.

The Tongan-born star has been an ever-present feature in the Welsh team and jetted to Australia as part of Wales’ first-choice back-row.

But after starting 16 consecutive internationals, Faletau was forced home from Australia early after breaking his thumb in the first Test.

Veteran Osprey Jones, who represented the Lions in 2005, filled the void and was one of the shining light of Wales’ 3-0 series defeat at the hands of the Wallabies.

Now Faletau knows the pressure is on to perform upon his return for Newport Gwent Dragons at the beginning of the season.

“Ryan was awesome in Australia and he is playing very well at the moment,” Faletau told the South Wales Argus.

“His performances were great for the Ospreys at the end of last season and he carried that on for Wales.

“I know that I will need to play well for the Dragons to get back in and we are all fighting hard for the starts. There is real competition across the back row.”

Faletau was forced to watch remainder of the agonising tour from the comfort of his living room back in Wales.  But he admits the enforced period on the sidelines could be a blessing in disguise following an action packed year.

“It has been a long season and it’s probably done me good to get a few weeks off and be able to chill out,” added Faletau.

“I need a break but I am looking forward to getting back into it.”