Wallabies wing Lachie Turner will step his rehabilitation up a gear on Saturday. [more] 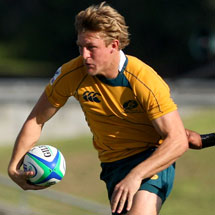 Wallabies wing Lachie Turner will step his rehabilitation up a gear on Saturday.

The Waratahs star was ruled out for six months in February, when he tore the hamstring off the bone in a Super Rugby warm-up match.

But he has been selected on the bench for Sydney club Eastwood, for their Shute Shield top-of-the-table clash with Southern Districts.

"Hopefully I can get a bit more game time this weekend against Southern Districts," said Turner, who returned to action last week.

"They've got a very strong back three with Brackin (Karauria-Henry) in there, and as a top of the table clash, it will be good test against some quality opposition.”

Turner, who could still feature against the Lions next year, enjoyed a dream return against Sydney University last week – the jet-heeled wing came off the bench to score the match-winning try.

"It was sloppy underfoot and a good test for the hamstring, which held up really well. It was a bit of a surprise being on at 13, but I've played a bit there, particularly at club level, so I was comfortable," added Turner.