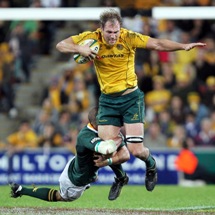 The former Wallabies skipper, who spent a season with Leinster in Ireland, has penned a two-year deal with Kobe Steel.

"Rocky won't be with us next year," said Michael Foley, Elsom’s coach at the Waratahs.

"We wish Rocky the best, he's had a particularly frustrating year with injuries he picked up during the international season last year."

Elsom has played just three matches for the Waratahs this season due to a succession of injuries.

He is currently sidelined with a shoulder problem and will miss the Waratahs’ final two Super Rugby matches.

But Kobe Steel hope to have the big ball-carrying back-rower playing by October.

It has also been reported that the Japanese club have granted the former Wallaby permission to join European clubs in their off-season. Top 14 giants Toulouse and Stade Francais have both been linked with the talisman.