Former England flanker Michael Lipman has given up on the chance to achieve a Lions' first next summer. [more] 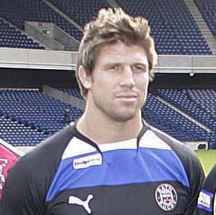 Former England flanker Michael Lipman has given up on the chance to achieve a Lions’ first next summer.

The Melbourne Rebels openside was in line to become the first player in the professional era – along with clubmate Gareth Delve – to represent one of the four Home Unions and then play against the Lions.

Riki Flutey faced the Lions in 2005 before winning his first England cap in 2008 but no player has matched that feat in reverse order.

After being embroiled in the drug scandal that hit The Rec three years ago, the London-born but New South Wales-raised openside returned Down Under and played for club side Warringha before signing for the Rebels ahead of their inaugural Super Rugby campaign last season.

The 32-year-old’s experience would have stood him in good stead to play against the Lions when they head to Melbourne for their eighth tour match on June 25, four days before the second Test against the Wallabies in the same city, but Lipman will now just be an interested spectator.

After a number of knocks to his head in recent years, Lipman has decided to retire from the sport almost exactly a year to the day before he could have been helping the Rebels plot the Lions’ downfall.

“I’ve just had too many bumps to the head. I’ve possibly had over 30 concussions in my career and the last couple have been the icing on the cake,” said Lipman.

“It’s disappointing because my body and heart always say ‘yes, keep going, keep going’ and I’ve been doing that for the past four years. Theoretically, I should have retired a long time ago with the number of knocks I’ve had.

“That’s one of the hardest things that comes about as a player – you’ve got to make up your mind, see that your body’s talking to you and realise that it’s time.  It was difficult, but coming to this decision was the best thing for me.

“I’ve been very lucky to have played with the players that I’ve played with and with where I’ve played. For me, playing professional rugby is a great test of character. You are constantly measuring yourself against the best and pushing your body beyond its limits. There really is nothing better.”