Three-time Lions tourist Neil Back has been appointed forwards coach at Edinburgh. [more] 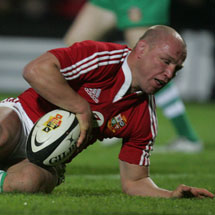 Three-time Lions tourist Neil Back has been appointed forwards coach at Edinburgh.

The England World Cup winner, who toured South Africa, Australia and New Zealand with the Lions, has signed a two-year deal to join the Murrayfield outfit.

Last season Back guided Rugby to an unbeaten season where they won all league and cup matches to win promotion.

Edinburgh head coach Michael Bradley said: “I’m delighted to have secured Neil Back as our new forwards coach. There is a consistent thread of success throughout his playing and coaching career, his attention to detail is exceptional and he has already outlined clearly the standards he expects of himself and our squad.

“Technically he is very strong and his coaching credentials stand out as someone who gets the best out of players – a characteristic which, added to him being a consistent winner, makes him a very positive appointment for Edinburgh Rugby.

“If our forwards can embrace that sort of focus and commitment, something I think they crave, then Edinburgh Rugby will go from strength to strength.”

He made 16 appearances for the Lions, scoring five tries.