Tomas O'Leary is determined to revive his international career at London Irish. [more] 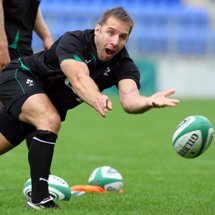 Tomas O’Leary is determined to revive his international career at London Irish.

The former Munster scrum-half was forced to switch to the Madejski Stadium after falling out of favour at province and country.

O’Leary, who was selected for the 2009 Lions tour but missed out through injury, was overtaken in both pecking orders by Connor Murray and was left out of the recent squad that crashed to a ‘blackwash’ at the hands of New Zealand.

The 28-year-old admits sitting on the bench at Thomond Parks was frustrating but he aims to launch himself back into international limelight by securing regular rugby with the Exiles.

O’Leary said: “Coming to London Irish is definitely the change I needed. Everyone wants to play week in week out and it was frustrating not to be picked at Munster.

“Going back a year and a half I was unfortunate with injuries but I had a good spell fit last year and lost out on selection.
“It’s great to start a fresh in London and hopefully I can re-establish my form.

“Playing for Ireland is definitely still a big aspiration, I’d love to be back in the squad.

“But your club form comes first and if you are not playing well there you have no hope.

“If I can get back playing regularly hopefully that will be beneficial to me – I’m hoping to play some good rugby again to put my hand up for international honours.”

Although he is out of the spotlight of the Irish spotlight the Cork native has been assured national selectors will be keeping an eye on him.

O’Leary will get his first taste of Aviva Premiership action against Saracens in the Twickenham double-header on September 1.

And he reckons the chance to play in the highly competitive Premiership, as oppose to the RaboDirect PRO12, will be a major boost to his chances of further honours.

O’Leary added: “It might be more difficult to get picked when playing abroad but I wasn’t getting regular games in Ireland and this move will only improve my chances.

“You look through the fixture list and there are no easy games. It’s really competitive week in week out and that’s exactly what you want if you want to improve.

“They (Ireland) will be keeping an eye on things over here and if I can get a good run of form Declan might give me a call.”
Tomas O’Leary was speaking at the launch of the 2012-13 Aviva Premiership fixtures.