England scrum-half Ben Youngs is set for a prolonged period on the sidelines. [more] 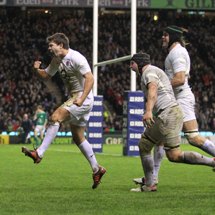 England scrum-half Ben Youngs is set for a prolonged period on the sidelines.

The Leicester Tigers star is recovering from shoulder surgery after picking up an injury during England’s recent tour of South Africa.

He was initially expected to be out of action for up to three months but it is now feared the 22-year-old will be ruled out until the end of October.

"Ben has had surgery and he is having holiday time at the minute, which is important," said Cockerill.

"He will miss the first rounds of the Heineken Cup (in October), which is not ideal because you want your best players playing in the biggest games.

"When he is fit, he will be back on the field. It is typical that he will get fit and then we will lose him to the autumn internationals."

Micky Youngs and Sam Harrison will battle it out for the number nine jersey in the England international’s absence and Cockerill is confident the duo are up to the job.

"Micky is keen to prove himself. He had a nightmare last season with injuries and suspensions.

"Both he and Sam have been full-on in pre-season so far. We have two very good young players there.

"We would like to have Ben available but both of those players will do a fantastic job."

But the Tigers have received more positive injury news on several other players including 2009 Test Lion Tom Croft.

"Tom Croft (neck) should be ready at the end of September and Jordan Crane should be okay," added Cockerill

"He (Crane) has been training for a while now but we have to be careful because he had a serious injury which has seen him out of the game for a long while.

"Louis Deacon (torn hamstring) is doing well, too. We just have to make sure everything is right.