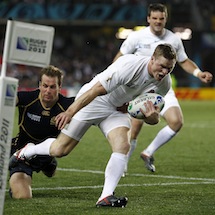 England wing Chris Ashton is determined to rediscover his red-hot form at Saracens.

The former rugby league star burst onto the Test scene with 15 tries in 17 internationals, including his sensation try length of the field try against the Wallabies in November 2010.

But he has failed to maintain his impressive strike-rate with a nine match try doubt.

But the flyer, who could tour Australia with the Lions next year, hopes to return to his best after quitting Northampton Saints.

“A new start, a new challenge, I can’t wait to get in there and get going.

“I’ve had two weeks off and am already sick of being sat at home. I want to get in there and get started. I’m really looking forward to it. Hopefully it will go well.

“I’m learning all the time. That game (against Australia) was right at the start of my England career so I’d like to think I’m a lot more experienced now and confident. Hopefully I can come back.”

Most recently Ashton, and England, crashed to a 2-0 series loss to South Africa.

The former Saint started all three matches including the draw in the final Test in Port Elizabeth.

Next up for Stuart Lancaster’s men is an autumn series that includes matches against the Wallabies, Springboks and world champions New Zealand.

“South Africa is one we’re going to be looking towards,” added Ashton.

“Going over there was pretty tough on us. I think we’ll be ready for them coming over here on our home ground. I’m looking forward to that one especially.

“New Zealand of course is always a good game and a chance for us to see where we’re at with all the big teams coming over.”