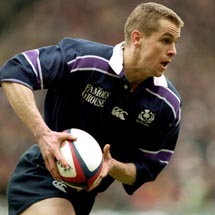 Scotland Rugby’s chief executive Mark Dodson has set out a set of goals for the national side which include winning a Six Natios Grand Slam by 2016 and claiming the World Cup.

Some have claimed Dodson’s targets are unrealistic but Paterson, Scotland’s most-capped player, reckons they can be achieved.

"If you set yourself ambitious goals, which are at the top of the ladder if you like, then you have to work your way up the ladder rung by rung to get there,” Paterson, who has now retired from the game, told the Scottish Herald.

"There are always different challenges and goals to achieve before you hit the top so if you can get the small bits done and do things incrementally then let's hope they [Dodson's aims] are attainable.

"As a player you always want to set the bar high and certainly I used to work at things incrementally. There is no point thinking about five years' time if you have a pre-season session in an hour. It is all about doing A before B.

"At a World Cup everyone can beat everyone else and if you can get on a good run then who knows? There is a lot of rugby to be played before 2015 though."

Paterson was returning from a short-term stint coaching with Canterbury Crusaders in New Zealand, when Scotland claimed their historic win over Australia last month.

Andy Robinson’s men backed the triumph up with further victories over Fiji and Samoa, returning as the most successful home nation.

"International rugby comes down to such fine margins these days and to come back with three wins is fantastic,” said Paterson.

“The attitude and the desire and commitment was there to see, but I know Andy and the players wanted to perform even better. I think the expectation is always high; players always want to win.

"They will know the Autumn Series [against New Zealand, South Africa and Tonga] will be very tough, but will be feeling good going in with three wins."