England scrum-half Danny Care has been cleared of an alleged sexual assault. [more] 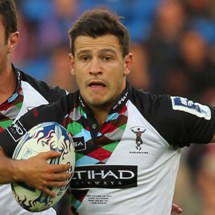 England scrum-half Danny Care has been cleared of an alleged sexual assault.

The Harlequins star was arrested by West Yorkshire Police following an incident in Leeds in the early hours of Sunday, March 4.

The 25-year-old was bailed pending further inquiries, but it has now been confirmed that police have ended their investigation.

"The Crown Prosecution Service (CPS) and West Yorkshire Police have advised Danny Care's legal representatives that he will not be charged in relation to an alleged incident of sexual assault in Leeds on 3 March 2012," said a Harlequins statement read.

Care has been cautioned by police for being drunk and disorderly on the same night but he denied the allegation of sexual assault.

"I am relieved and happy that the investigation by the police and the CPS has come to this conclusion and that the process is now finished,” said Care.

"I would like to thank all those who have supported me through this difficult time, in particular, my family and friends and all at Harlequins.”

Care was recalled to the England team by coach Stuart Lancaster for the recent tour of South Africa and started in the final Test.