Peter Stringer hopes to revive his international career after returning to Munster. [more] 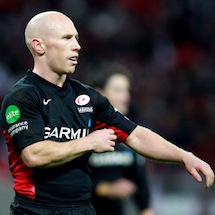 Peter Stringer hopes to revive his international career after returning to Munster.

The two-time Heineken Cup winner, who has won 98 Ireland caps, spent the second-half of last season at Saracens and Newcastle.

Stringer reckons the experience was beneficial to his game and he now hopes to use his return to Limerick as a launch pad to further international honours.

"It suited Saracens and it certainly helped me; the whole experience was a massive plus, the game time was the priority for me,” said Stringer.

“I got decent game time with Saracens and when I went to Newcastle I played 80 minutes of the five or six games I was there.

“As a professional rugby player that’s all that anyone wants to do, to play week in and week out.

"The time I spent in England was proof to me that I am still capable of competing at and doing really well at that level and that I still have a lot to offer.

"It surpassed any expectation I had of moving away from Munster. I thoroughly enjoyed the six months and I’ve come back with a lot of game time under my belt.

“I feel confident coming home and I am really excited about the new season here."

Part of Stringer’s new appetite for rugby in Ireland is down to Munster having a new coach but he does not expect any special treatment from New Zealander Rob Penney.

"I’ve had a chat with some New Zealand guys," said Stringer,

"He is held in very high regard, he’s a guy who doesn’t take any s**t but that’s fine, that’s what we’re used to, and I’m sure he will fit in really well here in Munster.

"I’ve come back with the mindset that I’m not finished, not by a long shot."