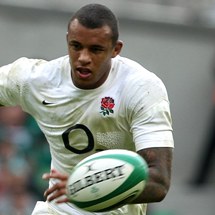 The England second row has undergone surgery on an elbow injury that could rule him out of the early stages of the new season.

The 23-year-old picked up the problem in pre-season training and had an operation earlier today.

“Courtney has had an operation on an elbow injury and is rehabbing well,” a Northampton spokseperson told the town’s Chronicle newspaper.

The club are quietly confident that their star forward will return in time for the Aviva Premiership opener at Gloucester on September 1 but the news is a big blow for the Lions hopeful.

Lawes is among the favourites for a lock spot when Britain and Ireland’s elite head to Australia next summer but he has struggled for game time so far this year.

Capped 14 times by his country, Lawes hasn’t played for his club side since January.

He featured just once in the Six Nations – as a replacement against Wales – after struggling with a knee problem following the Saints’ domestic defeat to Leicester.

Having been pushing for a starting berth against France despite making the mistake that led to Scott Williams’ winning try at Twickenham, Lawes was then struck down by a shin injury that kept him out of the final two matches of the tournament and Northampton’s Premiership run in.

He missed England’s summer tour of South Africa but has since been named in Stuart Lancaster’s EPS squad ahead of the autumn internationals.