Described during the 1955 Lions tour as the best fly-half ever to visit South Africa, Cliff Morgan ranks as one of the top No10s ever to come out of Britain or Ireland. [more] 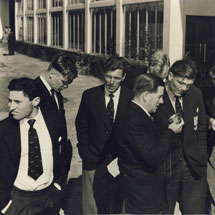 Described during the 1955 Lions tour as the best fly-half ever to visit South Africa, Cliff Morgan ranks as one of the top No10s ever to come out of Britain or Ireland.

The renowned Cardiff playmaker appeared in all four Tests during the 2-2 series draw with the Springboks 53 years ago, helping the Lions leave for home with a huge sense of pride in both the results they achieved and the manner in which they played.

A hugely talented attacking outside-half, Morgan preferred to keep ball in hand rather than kick possession away. His eye for a gap, impressive acceleration and superb distribution created numerous tries for his outside backs.

A try scorer in the first Test win in Johannesburg, Morgan became the only Welshman to captain the Lions to a Test victory in South Africa when he led the side in the third rubber at Loftus Versfeld in Pretoria.

Morgan had previously skippered the Lions in a tour game against North Eastern Districts, a match in which he had scored a brace of tries in a 34-6 win.

Having won 29 caps for Wales and been heavily involved in his country's only ever win over the All Blacks, Morgan retired in 1958.

Although he put an end to his playing career at the tender age of just 28, he continued to be involved in the sport through his television and radio work with ITV and the BBC.

Morgan was hugely popular during his time as a rugby commentator, while his off-field career was as equally successful as his time as a player.

In 1997, the same year that the Lions secured a series victory over the Springboks, Morgan was fittingly selected as one of the original inductees in the International Rugby Hall of Fame.

On being asked to become a Lion

"I never really thought twice about accepting Jack Siggins' invitation to join the Lions tour of South Africa in 1955. It was an offer you couldn't refuse, a chance and a challenge to play the best rugby in your life.

"I felt that once I had been a Lion I would have done everything I could in the game. I looked at the company I would be keeping. The other nine Welshmen I knew well, but the buzz I got was from the thought of playing with Jeff Butterfield as my centre and Tony O'Reilly on the wing."

On the splendor of song

"We came to the decision that we were going to be a singing team. I was appointed choirmaster, with first call on the hotel piano, and every day for a week we practiced, English, Scottish and Irish songs in English, Welsh songs in Welsh and, in a four-part harmony, Sarie Marais in Afrikaans, which we thought would go down well with the people over there. We learned this parrot-fashion, and the words of the Welsh songs I wrote on a blackboard.

"It paid off eventually because, although there are always some hurt feelings when players are competing for a place, we were an extremely happy side.

"Coming down the steps of the plane, we were amazed at the crowds who had waited so long to greet us. I turned round and said, 'OK lads, look at the people'. So we all came to a stop and sang practically our full repertoire from Sospan Fach to Sarie Marais, cheered on by the crowd. And that was the spirit of that trip, everybody together.

"Later that week the Rand Daily Mail carried a front page headline: 'This is the greatest team ever to visit South Africa'. And we hadn't even played a match!"

On size not mattering

"The South African Rugby Union took us to see one of their own games and put us in seats on the touchline which were below ground level. We were looking up at the players, who all seemed 15 feet tall, and they frightened us to death. We looked at each other and, in comparison, we were all little fellows: how could we compete?

"Yet on the field in the months to come, the Lions team proved that size and weight weren't all-important, particularly in winning a reasonable share of the ball against the odds."

The 1955 Lions drew the four-match series with the Springboks

On an incredible atmosphere in the first Test

"Playing in the first Test would have been an extraordinary experience whatever had happened on the field. It drew the biggest crowd ever to watch a rugby international – officially 96,000. But thousands more got in without paying, since tickets were pushed back over fences to people waiting outside to re-use them. There was a grandstand on only one side of Ellis Park at that time, so the rest were crammed into standing areas. Their impact was almost overpowering as you came down the flight of steps on to the field.

"And another thing that staggered us was that, on the touchline 20 yards out from the front of the grandstand, the Springbok selectors sat in a row of chairs on their own. Everybody knew who they were, and so they were there to be booed, cheered, heckled or whatever took the fancy of the crowd."

On a carefree attitude

(Talking about Tony O'Reilly's disallowed try in the first Test.) The referee went round and awarded a try before he noticed that the touch-judge six yards back had his flag up. According to him, Tony had put his foot in, and so the try didn't stand. Tony just walked away, and so did we all. And maybe that was the difference between the rugby that became professional and the rugby that we played on tour. We wanted to play hard, wanted to win, but our attitude was basically carefree. Maybe we had scored a try, I don't know, but it didn't matter, it wasn't worth an argument."

"I find it sad to contemplate a rugby world with no more Lions tours, and none of the opportunity they provide to play alongside former and future opponents, sharing their lives and their views on life.

"That tour to South Africa did a great deal to teach me that you had to have confidence in your fellow man and faith that he wasn't going to let you down. Your life was enriched by a feeling that everybody wanted everybody else to do well, which is what made the whole experience for me."

On that special Lions spirit

"The Lions party had such a strong family spirit that the friendship within it survived even the strain of arguable team selections and inevitably unfair shares of the limelight.

"What you realise now is that bonds are created and people stick together when they haven't got too much to spend. In our case, the bond held too, as our reunions afterwards proved."