Following the sad passing of Dr Jack Matthews at the age of 92, lionsrugby.com looks back on the career of a true Lions hero. [more] 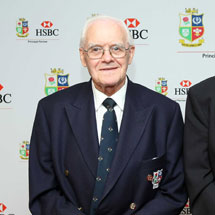 Following the sad passing of Dr Jack Matthews at the age of 92, lionsrugby.com looks back on the career of a true Lions hero.

Highly respected by team-mates and opponents alike, Matthews was a prominent figure on the 1950 tour of Australia and New Zealand.

The Welsh centre may have been one of the shorter players on that tour but what he lacked in inches he more than made up for with an array of skills and a steely determination to succeed.

Matthews' defence was legendary. In a similar manner to that of his countryman Scott Gibbs, he tackled far above his weight and was perhaps the major reason why the 1950 Lions earned a reputation for their whole-hearted rearguard action as well as their silky running.

Matthews gained the ultimate respect of the New Zealand public who christened him 'Iron Man' in recognition of his destructive attributes and his brave nature. That nickname was more than appropriate considering Matthews' exploits off the pitch and inside the boxing ring.

For eight years between 1947 and 1955, Rocky Marciano was the undisputed Heavyweight Champion of the World, yet Matthews more than held his own when the two faced each other at RAF St Athan in 1943. Marciano knocked out 43 of his 49 opponents during his unprecedented professional reign yet Matthews went the distance in a three-round amateur contest with the then 19-year-old GI, with no winner declared at the bell.

By the time of the 1950 Lions tour, Matthews was a 30-year-old veteran who would play in all six Test matches against the All Blacks and the Wallabies. He formed an instrumental centre pairing with fellow Welshman the late Bleddyn Williams, with whom he also played his domestic rugby for the highly successful Cardiff club. Matthews also captained the tourists when Williams and Karl Mullen were unavailable in provincial fixtures.

Thirty years after touring with the Lions as a player, Matthews earned his place in another Lions squad, this time as team doctor on the 1980 trip to South Africa.

"The tour cost me a lot of money! I had to pay a locum doctor over £5,000 and we were giving seven shillings a day expenses by the International Board. It wasn't very easy but my wife said, 'yes you can go'."

"I enjoyed the rugby and that was the main thing. I think it is the ultimate for any rugby player, whatever nationality, English, Irish, Welsh or Scottish.

"There was lots of training onboard the ship on the way over as two of the players, John Robins and Ken Jones, were PT officers. We also had lots of meetings together daily so there was good bond."

On playing for Cardiff and with fellow Welsh Lion Bleddyn Williams

"We had a great post-war side with Cardiff. Our home gate was 35,000, that was the average. Cardiff soccer were in the first division then and we were getting more than them.

"Bleddyn and I had been playing together since 1938 and we've been friends ever since."

"I was the team doctor for the Lions in 1980, the first time they'd ever taken one. Bill Beaumont was captain and Syd Millar was manager.