Reds ready to progress in 2013

Queensland Reds will be a stronger side by the time the Lions come calling according to their head coach. [more] 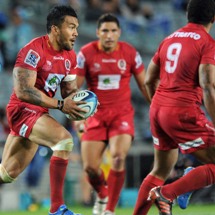 Queensland Reds will be a stronger side by the time the Lions come calling according to their head coach.

The reigning Super 15 Champions were knocked out of the southern hemisphere’s premier club competition at the weekend as they fell to a surprising home defeat to the Sharks.

The Reds were convincingly beaten 30-17 in Brisbane as the Natal-based visitors booked a semi-final spot against fellow South Africans the Stormers next week.

It was a disappointing end to a mixed season for McKenzie’s men who pipped the Brumbies for top spot in the Australian conference in the final week of the regular season.

Quade Cooper’s one-game suspension and early injuries to replacement fly-half Ben Lucas and hookerSaia Faingaa didn’t help their cause at the Suncorp Stadium on Saturday but McKenzie preferred to focus on the positives rather than make excuses for a frustrating showing.

''There's a lot of things to be positive about,'' said McKenzie, whose team face the Lions in the third game of the 2013 tour of Hong Kong and Australia.

''There's been a lot of talk about the Brumbies having a great season but our team's average age is younger than theirs, so we've got a lot of football ahead of this group.

''I've been involved for three years, and a lot of the guys have come into the program, and they've developed as players into Wallabies.

“It wasn't a great one (on Saturday night) but we will dust ourselves off and keep going.''

While McKenize admits his team were below par against the Sharks, he has no regrets about his own tactics despite copping some criticism from opposite number John Plumtree for opting to move Wallaby star Will Genia to No10 when Lucas was forced off during the first half.

Plumtree suggested the Reds would have been better off switching centre Mike Harris to the playmaking position and keeping Genia in his traditional role of scrum-half.

But McKenzie, who remains the favourite to take over from Wallaby boss Robbie Deans once next summer’s Lions tour is over, insists he and his fellow coaches made the right call.

"Like we've learned this year we've always got plan B and C, and we went to that," added McKenzie.

"Will went to 10, and went to 10 last time we played the Sharks, so we've been practising that scenario.

"That was fine and we were prepared for that, and we got the flow we needed. We wanted to fatigue them, we wanted to move them around and we were doing that.

"We couldn't control it completely in the end so it got a bit frustrating."