Wallaby star Kurtley Beale is hoping to resolve his off-the-field problems out of court. [more] 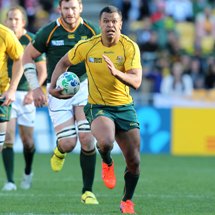 Wallaby star Kurtley Beale is hoping to resolve his off-the-field problems out of court.

The world’s leading full back was granted bail on Tuesday to attend mediation sessions with his alleged victim having earlier been charged with common assault.

Beale was involved in an alleged altercation with a bouncer after he and Wallaby teammate Quade Cooper were refused entry to a pub ahead of Australia's opening Test with Wales last month.

The 23-year-old, who is expected to playing a major role in his country’s quest to beat the Lions next summer, made a brief appearance in a Brisbane court in which his lawyer told magistrates that his client and the complainant were attempting to resolve the matter themselves.

The hearing was deferred for eight weeks to allow this to happen and Beale will not to have to face the court at the next sitting on August 22.

That leaves him free to feature in the Wallabies’ opening Rugby Championship fixture with the All Blacks on August 18 as they look to defend their Tri Nations crown in the newly extended competition.

Beale will have to travel back to Queensland to face further court dates if mediation proves unsuccessful but Wallaby boss Robbie Deans is delighted that one of his most influential players has been given some breathing space to prepare for the tournament opener in Sydney.

"I understand his case has gone to mediation and has been deferred for eight weeks, so he'll be available certainly up to that point," said Deans.

"That's good. It's good to have that clear for now. That's encouraging.

"There's still a shadow in the background but off the back of that you'd hope it will be resolved out of court.

"He's been working hard, he's got that rib injury but that's settled so he should be in good shape."

Beale missed the shock defeat to Scotland and the first two Tests with Wales due to a shoulder injury he picked up playing for the Rebels against the Hurricanes at the end of May but he did return in time for the last of the three clashes with the Welsh on June 23.

The former Waratah has since suffered another setback in a disjointed first season in Melbourne after he fractured a rib against the Reds at the beginning of this month.

Beale sat out the Rebels’ final two Super 15 matches in South Africa but is expected to be fully fit for the clash with World Champions New Zealand in three-and-a-half weeks’ time.