Lions hopeful Richie Gray has been warned his reputation counts for nothing at new club Sale Sharks. [more] 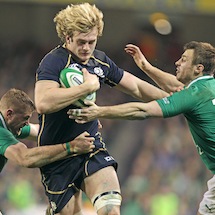 Lions hopeful Richie Gray has been warned his reputation counts for nothing at new club Sale Sharks.

The former Glasgow lock has joined the Aviva Premiership outfit in the off-season.

Gray has forged a fierce reputation since making his Scotland debut in 2010, and has been tipped for Lions selection next year.

He was one of the shining lights of Scotland’s disappointing Six Nations campaign earlier this year and continued his fine form during their summer tour.

But Sale head coach Bryan Redpath, who switched from Gloucester, has told Gray, and the club's other new signings, to hit the ground running in the north west.

“The big thing for our new guys is that they have to get their fitness up to scratch,” said the former Scotland scrum-half.

“Everyone coming in will be subject to a conditioning course. There will be no exceptions and I’m a great believer that, if you are fit, you can cope with most things that are thrown at you.

“Anyone coming in will have to fight to ensure their head is right and they are fit. When you are fit, the game is easier and you are mentally stronger.

“When you are not as fit, you tend to pick up injuries as you are not sharp and you get caught off balance.

“Having a player of the calibre of Richie is only going to help us develop but he still needs to prove himself. The key is to build on what Sale achieved last season.

“Buying into the Sale culture as quickly as possibly will help us speed the process.”

Gray was handed an extended break this summer, following his exertions with Scotland in the southern hemisphere.

Andy Robinson’s men were the pick of the home nations while Down Under and recorded wins over Australia, Fiji and Samoa.

But Gray’s only focus now is with his new club and continuing his red-hot form as Sale begin life at their Salford City Stadium home.

“I’ve met all the boys, they’ve been great and are a really friendly bunch of guys – they’ve made it easier for me to settle in,” said Gray.

“Pre-season training has been quite tough, really tough actually. It’s been a bit of a shock to the system.

“I found some muscles I didn’t know I had before. There were a lot of down and ups and with my height it wasn’t exactly the greatest thing but I got through it – I was close to being sick though.

“I would love to have a great impact here and be part of a winning team because that’s what it’s all about.”