Lions contender Dylan Hartley has his sights set on emulating one of the stars of South Africa's series win over the Lions three years ago. [more] 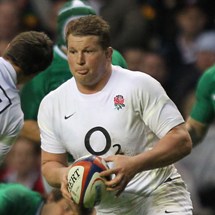 Lions contender Dylan Hartley has his sights set on emulating one of the stars of South Africa’s series win over the Lions three years ago.

England hooker Hartley played against Bismarck du Plessis when the Red Rose took on the Springboks this summer and the 26-year-old believes he was facing the best the world has to offer.

Du Plessis started the first and second Tests as the Boks beat the Lions in 2009, with then head coach Peter de Villiers moving skipper John Smit to prop to accommodate his in-form Sharks team-mate.

The 28-year-old has since cemented his position as his country’s number one No2, while Hartley has gone on to become one of the favourites for a Lions berth when Britain and Ireland’s elite head Down Under next year.

"I played against Bismarck du Plessis who is probably the best around at the moment in my position and that is kind of the benchmark," said Hartley, who captained England to a 14-14 draw in the final Test after the Boks narrowly won the first two encounters last month.

"I like to think that I can get somewhere near that in a few years. So that was good for me and a good experience.

"But from a team level, we know that the last game – and every game – we were within a score of winning in the last five or 10 minutes.

"We can compete with these big boys on foreign soil, so when they come over in November time we'll be ready for them."

While Hartley is already thinking about November’s Tests against Fiji, Australia, South Africa and New Zealand, he admits his first priority is on starting the season strongly with club side Northampton.

The Saints suffered an early exit in last season’s Heineken Cup and were beaten at the semi-final stages of the Aviva Premiership for the third season running but Hartley is in positive mood ahead of the new campaign.

"Coming back (from England duty) I've seen that the work ethic and the application is there. The lads are looking fit and strong and we've got a young squad," added Hartley.

"When you're working hard together that usually comes through on the field. The lads have been doing six weeks of grafting and working through three sessions a day. It's hard work and it's through that the team bonds, so you want to be a part of that.

"It's nice to be back. It's a balance of having a holiday and some down time, but you don't want to be missing out."