Alex Goode is hoping to build on a fine start to life as an international as we enter Lions season. [more] 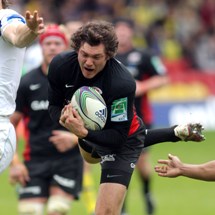 Alex Goode is hoping to build on a fine start to life as an international as we enter Lions season.

The Saracens full back made his long-awaited Test debut on England’s summer tour of South Africa, impressing in both the second and third encounters with the Springboks.

Goode, who first appeared for England’s second-string Saxons as far back as four months before the last Lions tour, came on as a late replacement in the defeat in Johannesburg and then started the 14-14 draw in Port Elizabeth a week later.

The 24-year-old former fly-half looked far from out of place on the big stage and he is now aiming to push on as England turn their attentions to autumn Tests against Fiji, Australia, South Africa and New Zealand.

“When you get a feel for international rugby, you just want to keep playing it more and more and grab the opportunity,” Goode told the RFU.

“I was lucky enough to play quite well out there and I thought things went well for me.

“’m in the EPS squad now and can get some good form going in pre-season and then pushing on through to the first seven or eight weeks of the season.

“The QBE Internationals come around in the autumn and I hope to be in the mix.

"It’s a really exciting year and I’m looking to carry on where the England tour finished and continue playing well.”

Considering the make up of Stuart Lancaster’s 32-man EPS squad, it would be a shock if Goode wasn’t at least challenging for place in the matchday 22 come November.

His ability to cover fly-half as well as full back obviously counts in his favour when it comes to a spot on the replacements’ bench but the lack of out and out wings in Lancaster’s party suggests that Goode has a decent chance of nailing down a starting place.

Ben Foden looks like he is being viewed as a wing as well as a full back as Charlie Sharples and Chris Ashton are the only other widemen in the squad, meaning Goode could end up battling Mike Brown for the No15 shirt.