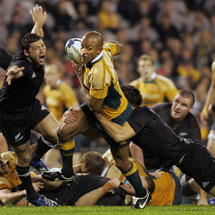 The Leinster and Ireland stalwart is 13 caps adrift of Gregan on the all-time international appearance list with 126.
But the former Wallabies scrum-half, who faced O’Driscoll three-times during the 2001 Lions tour, has tipped his former rival to write his name in history.

“Records are there to be broken. If Brian gets past it good on him and I’ll be the first one to buy him a beer,” said Gregan

O’Driscoll could play in as many as 11 Test matches next season, if he is taken to Australia by the Lions.

Some pundits have expressed doubts over whether the Ireland captain can become just the third player in history to go on more than three Lions tours.

But Gregan, who played on until he was 34-years-old, reckons the star centre can return Down Under for a second tour by demonstrating his never-say-die “Aussie attitude”.

“I have seen bits pieces of him recently and he is still a wonderful attacking player. If he keeps himself physically right and keeps playing at a high level he can definitely go,” added Gregan.

“It all comes from within and he is a pretty competitive guy. He might be Irish but he has a real Aussie attitude in the way he goes about his game – he has a real crack.

“I’m a big fan of Brian O’Driscoll. I would love to see him over here and I’m sure this is a big carrot for him as well.

“Not many people have managed to do two Lions series in the same country. He’s certainly got a lot to play for in the next year.”