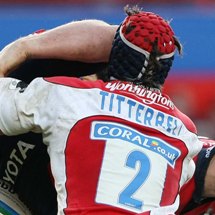 Titterrell, who toured New Zealand with Britain and Ireland’s elite seven years ago, has signed a one-year deal with the Heineken Cup semi-finalists.

Lawrie has been out of action since December and is likely to miss the start of the season, leaving youngsters Alun Walker and George Turner as the only cover for 2009 Lion Ross Ford.

"I'm absolutely delighted with the opportunity to represent a club like Edinburgh Rugby in the RaboDirect PRO12, a league packed with some of the most successful teams in the last decade of European rugby, and also the Heineken Cup, as we seek to build on the club's great run in the competition last season," said Titterrell.

"We've some big pre-season matches coming up against English opposition who I know well so my focus is really honed in on getting to the know the guys in the squad, settling into the training routine at Murrayfield, and using these matches as a springboard to a big year with the club."

Capped five times by England but unable to really kick on after his Lions adventure, Titterrell brings a wealth of experience from stints with Gloucester and Sale.

He is the second former Lion to head to the Scottish capital this summer after 1997, 2001 and 2005 tourist – and Titterrell’s ex boss at Leeds – Neil Back joined the coaching staff.

"We're very happy to have secured the services of such an experienced campaigner," said Edinburgh head coach Michael Bradley.