The Force have swapped one Wallaby flanker for another when it comes to captaincy. [more] 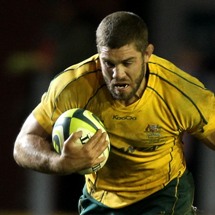 The Force have swapped one Wallaby flanker for another when it comes to captaincy.

The Perth-based franchise lost star openside David Pocock to the Brumbies this week as his transfer saga failed to go the way the Force were hoping.

Pocock’s departure was a major blow to the country’s bottom-placed outfit but the Force have since moved quickly to appoint Michael Foley as their new coach and have now announced Matt Hodgson will become the side’s skipper.

Hodgson, who has won six caps for the Wallabies, will take over from Pocock immediately as the Force look to regain some stability after a frustrating season on and off the field.

The 31-year-old has been at the franchise since its inception in 2006 and has made more appearances for the team than anyone except veteran second row Nathan Sharpe.

“This is a great honour. I’ve always thought of myself as being a leader by example but now I have the opportunity to stand in front of these guys and lead them into action,” said Hodgson.

“I want to still lead by example and that includes everything both on and off the field.

“Everyone’s excited about the new chapter we get to write next year. We have lost a couple of excellent players in David Pocock and Sharpie but this playing group will go from strength to strength.

"We’ll focus as a team, we’ll have that team mentality and we know that the team is greater than one player and we’ll be stronger for that.

“With the appointment of a new coach and captain, this provides a new direction for the team and everyone’s really excited about that.

“All the players are getting right behind this and looking to increase their responsibility within the team.”

Hodgson appears to be a popular choice in Perth, especially given his commitment to the club over the past seven seasons.

Foley believes the man who captained the Force in a friendly match in June is the right man to start the ball rolling at the Nib Stadium, although no official decision on the skipper for the 2013 season will be made until the eve of the new campaign.

“He’s a selfless supporter, he’s someone who gives 100 per cent every week and he displays all the qualities we hope to build into the squad over the next year or so.”