Lions legend Sir Ian McGeechan believes there are plenty of reasons to be cheerful ahead of the trip to Australia. [more] 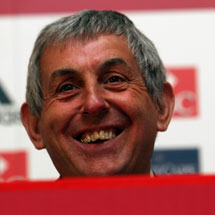 Lions legend Sir Ian McGeechan believes there are plenty of reasons to be cheerful ahead of the trip to Australia.

Britain and Ireland’s elite head Down Under next summer for a tour that begins in Hong Kong against the Barbarians and concludes with a three-match series with the Wallabies.

The Lions are looking for a first series win since McGeechan led them to a stunning success in South Africa 15 years ago but they travel south on a high following a thumping third-Test victory over the Springboks in 2009.

And McGeechan, who has made a total of seven tours as a player and coach, feels the progress made on the last adventure, the potential continuity as far as management and staff are concerned, and the quality of players currently gracing British and Irish rugby means 2013 could be a huge year for the Lions.

“I think we got a lot of things right on the last tour and the Lions is still a phenomenal concept and team and a business,” McGeechan told Sport 360 degrees.

“It’s one of the most successful businesses in the professional game, and no one maybe saw that.

“And so it is important to have people who have that feeling for the Lions and I certainly think the support, the management and some of the players will then carry things forward from 2009 and that’s the way it should be. That’s where you keep the Lions pushing forward in the right way.

“I think there are some exceptional players around. Especially in the back row there will be some very good players who won’t make the Lions because of the talent that’s available.

“I think (with) the Lions, the preparation needs to be good and they (have to) have the time to develop that. That is important so that they can get to the Test matches as a competitive unit, but I think there’s some very talented players around and the Lions should go with a very strong squad.”