The Wallabies have placed their faith in experience less than a year out from the 2013 Lions tour. [more] 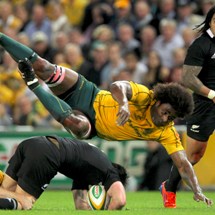 The Wallabies have placed their faith in experience less than a year out from the 2013 Lions tour.

Radike Samo, Drew Mitchell and Nathan Sharpe are among the standout picks in head coach Robbie Deans' 30-man squad for the Rugby Championship.

Versatile forward Samo is already 36, while Sharpe is just a year younger and has already retired from club rugby.

Mitchell is only 28 but, like Samo, has been plagued by injuries that forced him to question whether he could continue playing the sport last year.

Samo and Mitchell missed all four summer Tests against Scotland and Wales but both could now push for a place against Britain and Ireland’s elite next summer.

Digby Ioane appears to have one of the Wallaby wing berths nailed down but the other is definitely still up for grabs, while Samo's ability to make an impact from the bench, together with the fact that he can play second row and back row, could mean he earns a regular squad spot despite his age.

Reds back rowers Liam Gill and Jake Schatz are two of the new faces, while the third, Kane Douglas of the Waratahs, has seen off Cadeyrn Neville of the Rebels for the last of the four second row spots alongside Sharpe, Sitaleko Timani and Rob Simmons.

Quade Cooper is included despite not having played for his country since sustaining a knee injury in the World Cup win over Wales back in October but James O'Connor, Pat McCabe, Cooper Vuna and Joe Tomane are all out injured.

Former Leinster great Rocky Elsom isn't in the squad ahead of his move to Japan, while fellow back rowers Ben McCalman and Wyclif Palu also miss out, with the former having just recovered from injury and the latter still sidelined.

Regular skipper James Horwill is still struggling with a hamstring problem and front-row reserves are also a little stretched as props Salesi Maafu, Dan Palmer and Paddy Ryan are all unavailable

Nick Cummins, Dom Shipperley, Ben Tapuai, and James Hanson join Vuna – who requires shoulder surgery – Neville and McCabe as those to miss out having been part of the extended training squad who were involved in a three-day camp in Sydney last week.