The Waratahs are refusing to put a timeframe on the appointment on their new coach. [more] 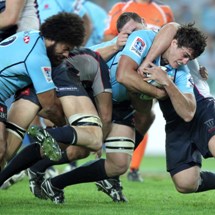 The Waratahs are refusing to put a timeframe on the appointment on their new coach.

Ex-Leinster coach Michael Cheika – the man who led the Irish province to their first Heineken Cup crown in 2009 – has been heavily linked with the job but an announcement appears far from imminent.

Alan Gaffney, a favourite with Saracens and Ireland, has been placed in temporary charge, while former Bath coach Steve Meehan is also thought to be in the frame for the permanent position.

Wallaby prop Benn Robinson recently stated that senior Waratahs players should be consulted on who is given the top job but acting chairman Al Baxter is insisting that the decision will rest with the Board and not the playing squad.

“Our priority is the long term interests of our members and fans and in ensuring that we appoint the most suitably qualified candidate for the role,” said Baxter, who gave no indication of when candidates would be interviewed.

“Whilst we welcome and value the views of our stakeholders including NSWRU, the Waratahs Rugby players and staff, ultimately the Board will make the decision, based on the recommendations of the rugby sub-committee.”

In order to prevent the debacle that surrounded the Force’s own coaching selection procedure in which Cheika was apparently offered the job but turned it down, the Waratahs will not be releasing the details of any of the candidates on their shortlist.

The Waratahs endured a desperate end to the Super 15 season, losing their last eight fixtures to finish 11th in the table before seeing team manager Chris Webb and chairman Edwin Zemancheff walk away from their roles in the last few days.