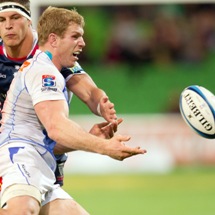 The star openside is currently preparing to lead Australia into the inaugural Rugby Championship as they look for the perfect preparations ahead of next summer’s Lions tour.

The 2012 Super 15 season was dominated by media discussions on where Pocock would be playing his rugby next term after the 24-year-old decided not to make his decision public until the end of the campaign.

Pocock finally ended those rumours late last month by announcing that he was leaving Perth for Canberra and swapping the Force for the Brumbies and he insists his mind is now on nothing other than Australia’s clash with the All Blacks on August 18th.

"It's a distraction as much you let it be," said Pocock, who was voted the Force’s Player of the Year before he left for the capital club.

"I was very clear on how I wanted to go about it. I asked until the end of the season to make the decision and I felt like I stuck to that timeline.

"Like any big decision, it's good to get it out of the way, and now I'm fully focused on the Wallabies and the Rugby Championship.

"I've loved my time at the Force but now that's come to an end.

"With rugby being a team sport, I'm a little bit uncomfortable with individual awards, but when it's voted on by your team-mates that's really special. They're the ones you're working hard for, the ones you need to impress and that's where the enjoyment comes from.

"You'd always trade in a man of the match or any sort of accolade for a win but to be voted for by your peers over a season is special."

Pocock is a nailed on starter for the Rugby Championship’s opening fixture in Sydney in a week-and-a-half’s time but there now appears to be some semblance of depth in the Wallaby openside ranks.

After being selected as the solitary seven at the 2011 World Cup, Pocock has been joined by youngsters Michael Hooper and Liam Gill in the 30-man squad for the upcoming clashes with New Zealand, South Africa and Argentina.

And rather than worrying about the presence of potential competition, Pocock is looking forward to seeing his rivals progress to the next level before the Lions come calling.

"It's great to have that depth – to see young guys come in after a couple of seasons,” added Pocock.

“It's been good for Australian rugby to have them in this program.

"My experience of first making the squad as a young guy is that you learn a lot every session, so I'm sure they are going to improve a lot."