Australia have their sights set on finally regaining the Bledisloe Cup according to Adam Ashley-Cooper. [more] 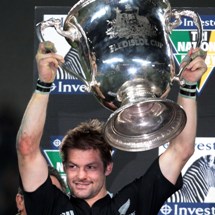 Australia have their sights set on finally regaining the Bledisloe Cup according to Adam Ashley-Cooper.

The Wallabies haven’t won the trans-Tasman trophy since 2002, with World Champions New Zealand dominating the exchanges between the two rival nations for the past decade.

Australia have recorded a number of notable victories over the Kiwis in that time but they have struggled to find the consistency needed to wrestle the trophy back by beating the All Blacks twice in a single season.

Losing the 2011 World Cup semi-final in Auckland last autumn was the latest reminder of their inferior record against their greatest opponents and Ashley-Cooper insists he and his team-mates are desperate to put things right this term.

"Individually it does sting, the semi-final is something the guys will never forget," said Ashley-Cooper, who made his debut back in 2005 but has never held the Bledisloe Cup.

"But being in camp for a couple of weeks now with the Wallaby team, you can see the response, the way the blokes have got together and it (the loss) was quickly put behind them. We've got a new focus and that for us is the Bledisloe Cup.

"I think Sharpey (Nathan Sharpe) is the only bloke in the current squad that's held the Bledisloe Cup. So 99 percent of this team really want that opportunity.

"Sharing experiences with guys that have held the Cup, there's no bigger achievement or triumph, outside of the World Cup, than the Bledisloe Cup. It's a really good opportunity for us as a team."

The first Bledisloe Cup meeting of the year takes place on August 18 when the new Rugby Championship gets underway in Sydney.

That’s followed by a second tie in successive weeks when the fixture heads to Eden Park on August 25 before the third and final installment in Brisbane on October 20.

As the All Blacks are the current holders of the cup, the Wallabies need to win at least two of the fixtures or win one and draw the other two to regain the trophy.