Wallaby centre Anthony Fainga'a believes versatility and competition for places has Australian rugby headed in the right direction prior to the Lions tour. [more] 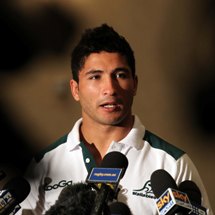 Wallaby centre Anthony Fainga’a believes versatility and competition for places has Australian rugby headed in the right direction prior to the Lions tour.

Australia entertain New Zealand in their opening Rugby Championship fixture a week on Saturday but even Fainga’a and his midfield rivals don’t know who’ll be wearing the No12 and 13 shirts in Sydney.

Injury to Pat McCabe has thrown even more mystery into the mix for an Australian outfit already without James O’Connor as they look to complete step one on the road to winning back the Bledisloe Cup from the All Blacks for the first time in a decade.

Berrick Barnes’ stellar performances at fly-half against Wales earlier this summer mean he is likely to stay at 10 rather than switch back to 12 so that leaves Fainga’a fighting three others for two spots in the centres.

Mike Harries, Rob Horne and Adam Ashley-Cooperare also in the running for a midfield berth and head coach Robbie Deans has been keeping them all guessing by employing a rotation policy in the Aussie training camp.

It’s a decision that could frustrate some players but Fainga’a isn’t among them. Instead the 2???-year-old is convinced it will bring out the best in the Wallabies next Saturday and beyond.

"No one's really got a lockdown on their position at the moment, so for us it's a great opportunity … that's going to create a great culture and attitude," said Fainga’a.

"Obviously it's disappointing for Patty (McCabe), but at the same time it's a great opportunity for the (other) backs to step up and take ownership of that centre partnership.

"It creates a healthy challenge and always keeps you on your toes, and that's something that drives high standards and is something… (the Wallabies) haven't really had in the past.

"We've got a good campaign in terms of training and work ethic, change of positions – we're really building towards some great rugby.

"We've had a lot of young guys come through and start to become experienced, so off the back of that hopefully comes success."