The first Rugby Championship kicks off this Saturday, with the Wallabies desperate to put down a marker ahead of next summer's Lions tour. [more] 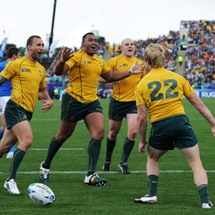 The first Rugby Championship kicks off this Saturday, with the Wallabies desperate to put down a marker ahead of next summer’s Lions tour.

David Pocock and co will be hoping to match last season’s victorious Tri Nations campaign as they continue the build up to the three-Test series with Britain and Ireland’s elite.

The last time the Lions came calling in 2001 the Wallabies were not only World Champions but Tri Nations kings as well and they even went on to defend their southern hemisphere crown after the tourists left for home.

Since then it’s been a more depressing story for the Green and Gold, with a decade of All Black and Springbok dominance hitting them hard.

The Wallaby faithful had to wait fully 10 years to celebrate another Tri Nations triumph as Robbie Deans and James Horwill finally led them to glory in 2011. World Cup success evaded them that same year but back-to-back Championship triumphs would raise spirits significantly prior to the Lions’ arrival Down Under.

So what are their chances of adding the first Rugby Championship title to the last Tri Nations prize? Well, the addition of the Argentines could throw a spanner in the works. The Pumas have beaten the Wallabies on four occasions and consistency hasn’t exactly been Australia’s strongpoint in recent years. The Aussies may be capable of destroying anyone and everyone but they are prone to lapses in concentration and the all-too-often off day, as the home defeat to Scotland this summer and a similar showing against England two years earlier proved.

Beating the Boks is well within the Wallabies’ capabilities but, as the current world rankings suggest, there’s very little between the two teams. The sensible money would be on the Wallabies winning in Perth on September 8 and the Boks following suit in Pretoria three weeks later.

South Africa edge the historical battles between the two nations with 41 wins to Australia’s 32 but it’s the Wallabies who have held the upper hand since the turn of the millennium. The Mandela Plate has only headed back to its homeland on three occasions in the 12 years since its inception, while the Wallabies have won four of the last five Tri Nations encounters between the two teams.

Australia also won the most recent fixture against the Boks but the result was highly controversial as referee Bryce Lawrence came under intense pressure for his interpretation of the breakdown during the World Cup quarter-final in Wellington. The South Africans felt they were robbed of victory on that particular day, with most observers agreeing that they were the side who deserved to advance, and the nature of that defeat is bound to add some extra spice to this season’s encounters.

As for Australia and the All Blacks, there’s only one winner there in terms of the historical context. The Wallabies have won just 30 per cent of their games against their greatest rivals with the Kiwis having triumphed in just shy of 100 of the 143 matches.

The recent past also makes poor reading for the Lions’ next opponents, with the All Blacks winning 10 successive games between August 2008 and September 2010. That was a tough time for the Wallabies, particularly as head coach Deans is a Kiwi himself and it was he who presided over all 10 defeats.

The criticism that flowed throughout the media and the general public during that time was pretty intense but fortunes have been more favourable since a one-point reverse in Sydney 23 months ago.

An elusive first win finally arrived in Hong Kong in October 2010 thanks to a last-gasp converted try from James O’Connor and things have been far more even ever since. The All Blacks got their own back with a 30-14 win in Auckland at the beginning of August of last year but Deans and co exacted revenge in the perfect style by clinching the Tri Nations title with a 25-20 victory in Brisbane later that month.

That particular success raised hopes ahead of the World Cup but they were dampened when defeat to Ireland in the pool stages meant they would face the hosts in the semi-finals rather than the showpiece event. The whole of New Zealand was a bag of nerves ahead of the latest trans-Tasman clash due to their highly-publicised flops at the past five global gatherings but the Aussies couldn’t take advantage as they performed well below par to exit with a whimper rather than progress to a third successive final.

Revenge has therefore been almost continuously on the lips of the pressmen ahead of Saturday’s Sydney showdown as the Aussies prepare for a mammoth year ahead. Australian Rugby Union CEO John O’Neill has spoken publicly about the need to regain the Bledisloe Cup at almost all costs, while Wallaby veteran Adam Ashley-Cooper is among a whole host of players to have echoed those sentiments.

Will they do it? Well, they certainly could do. The All Blacks have a new – albeit familiar – head coach and two of the three Bledisloe Cup fixtures take place on Australian soil. Consistency will once again be the key, though, and, whatever the Wallabies say, the pressure is on them rather than their world-number-one-ranked rivals.

The Wallabies need a big season to ensure they face the Lions full of confidence but uncertainty currently surrounds their long-term team selection. A number of major talking points are keeping the Aussie media busy right now, although the fact that Deans has made just two injury-enforced changes for Saturday’s opener suggests he is a little less vexed by the same issues.

Quade Cooper’s long-term knee problem has seen Berrick Barnes handed the fly-half spot – something that seemed unthinkable just over a year ago – while injuries to the likes of James O’Connor and James Horwill have created their own unwanted dilemmas behind the scrum and in the second row.

Deans’ decision to recall 36-year-old Radike Samo to his 30-man squad and persuade centurion Nathan Sharpe to stave off international retirement a little longer also throws up plenty of questions for next summer’s series with the Lions. A year is a long time in top-level rugby so for Radike to still be in fine form in 2013 will be a tough ask, while Sharpe has already called time on his Super Rugby career and initially planned to walk away from the Wallaby set up earlier this year.

Injuries to the likes of Wycliff Palu and Ben McCalman are also worrying for the Wallabies and that was before Pat McCabe became the latest big name to face time on the sidelines when he suffered a stress fracture to his left leg in training earlier this month.

McCabe’s absence means Anthony Fainga’a starts at inside centre for just the second time against the All Blacks, while Deans was left with limited options out wide after Joe Tomane and Cooper Vuna both picked up injuries of their own. Drew Mitchell’s return to the replacements’ bench after ankle, hamstring and then more ankle problems is a big boost but a lack of game time means he may take a while to find his feet.

But while the much-heralded backline, widely considered the best in the world in 2011, are struggling to stay fit or regain their best form, up front the Wallabies are looking better than they have done for a while despite Horwill’s hamstring issues and numerous back-row frustrations.

Having been berated for their weakness at scrum time and regularly mauled by Lions like Andrew Sheridan in the past, the Australian front row held their own against fellow Lions Test stars Gethin Jenkins, Matthew Rees and Adam Jones when they toppled Wales in June. Forwards coach Andrew Blades saw his setpiece stay solid throughout and that bodes well when it comes to their hopes of claiming Bledisloe Cup, Rugby Championship and Lions series success in the space of two summers.

The Wallaby scrum has been getting stronger and stronger

So often the Wallabies have been forced to win games with a minority of possession so to finally gain equality at least in that department could make all the difference against the world’s best. The Lions will likely look to make a statement up front in 2013 so the next two months will provide the Wallabies with the perfect test of their credentials against an-always tough All Black front three, a typically physical Springbok setpiece and an historically hard Argentine pack that have continually prided themselves of chewing up their opposite numbers in the tight exchanges. Come through all three of those scurmishes unscathed and the Wallabies will certainly send out an early message to the Lions.

But what other lessons are the Lions likely to learn from the way the Wallabies perform in the Rugby Championship?

Well, we should see how well they handle pressure as there’s certainly plenty of that this season given the frustrations of the World Cup and the growing annoyance at the extended absence of the Bledisloe Cup. We’ll also see how much strength in depth they really have given their unfortunate run of injuries of late. Deans has talked of his pleasure at being able to include three out-and-out opensides – a move that’s in stark contrast to the World Cup when he only picked one – but will the players who step in for the sidelined stars elsewhere really make the grade?

We should also find out more about the way the Wallabies want to play. Last year they were full of ideas and inspiration as they produced a largely successful style of rugby that was also stunning to watch. But failures against the Irish and the All Blacks in the autumn was followed by a more conservative approach in the summer. The clash with the Scots can hardly be counted when it comes to their attacking philosophy due to the horrific weather conditions but in the three games with Wales the Wallabies employed an unfamiliar safety-first approach. Deans has talked of the need to find the right balance and he’ll no doubt be looking to establish that as quickly as possible before the Aussies find themselves betwixed and between when the Lions arrive Down Under in what is already beginning to feel like the blink of an eye.