Dave Dennis is expecting a 'baptism of fire' when the Wallabies face the All Blacks on Saturday. [more] 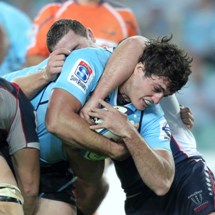 Dave Dennis is expecting a ‘baptism of fire’ when the Wallabies face the All Blacks on Saturday.

The Waratahs back rower will start on the blindside flank against the newly-crowned World Champions as Australia kick-off their inaugural Rugby Championship campaign in Sydney.

Dennis crowned a superb season by winning the Waratahs’ Player of the Year Award just a few months after the heartbreak of missing out on a place in the World Cup squad but he knows he will face a huge step up in the class this weekend.

The 26-year-old only made his Test debut this summer in the shock defeat to Scotland and, even though he featured as a replacement in all three wins over Wales later in June, starting a Bledisloe Cup encounter is undoubtedly the biggest moment of his career to date.

"I'm expecting a baptism of fire, but that's what you play for," said Dennis, who was plucked out of domestic club rugby with Sydney University to tour with the Wallabies in 2009.

"I played them at junior level but obviously playing a top team is a whole new experience.

"Missing out on the World Cup squad was disappointing, but it gave me a bit of a hunger to keep at it.

"This year I tried to play consistently to a higher standard. You just keep chipping away, keep working hard and keep doing what's required.

"It's kind of tough – last week receiving the Matt Burke Cup was special but we'd had such a terrible year, it was bittersweet. It is a team sport and I have always tried to think of if like that, so I am not getting too ahead of myself in terms of what I have achieved this year.

"What missing the World Cup has (also) done is give me hunger to hang around Australia for another four years. It is the ultimate for a player to play in a World Cup so I will be 29 in England (at the 2015 World Cup), so that's realistic for me."

While the next World Cup may be clear target for Dennis, the most immediate aim is to get the Wallabies’ attempts to add the Rugby Championship crown to their 2011 Tri Nations title off to a winning start.

The Wallabies may have finished top of the southern hemisphere pile last term but they have endured a torrid run of results against the All Blacks in recent years, with their trans-Tasman rivals having held the Bledisloe Cup for a full decade.

But despite the past pointing to another Kiwi win, Dennis is actually hoping history repeats itself as he was at the stadium in Sydney the last time the Aussies retained the trophy back in 2001.

"I played the curtain-raiser for the City versus Country under 16s – that was a massive experience for me," added Dennis.

"There was probably only a couple of thousand there early on, but that was big for my family.

"I remember it (the Bledisloe Cup match) well. I watched the game.

"A decade has passed and now I get the opportunity to try and win it back with the boys, which is pretty special."