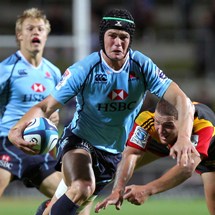 The Wallaby boss named Barnes ahead of Quade Cooper for the Rugby Championship opener after weeks of speculation surrounding the playmaker’s role.

Barnes impressed during the summer series win over Wales but Cooper’s return to fitness led to suggestions that the maverick 24-year-old could win a Test recall this weekend.

Deans eventually opted for what most observers view as the sensible choice and he has since admitted that Cooper’s lack of game time and Barnes’ fine form meant he didn’t suffer any sleepless nights during the selection process.

''His selection was pretty straightforward,'' said Deans when asked about why Barnes had been given the nod.

''This year hasn't been without its challenges for him either. You look at some of the frustrations of the Waratahs season and it wasn't easy. But he hit the ground running during the June Test series.

''And after playing well against Wales, I'm after more of the same from Berrick, especially as he is well versed in what we're doing.

''Quade is not quite on top of his fitness yet, but he has had a couple of club games and getting back into it. Quade was an option but in the end it was pretty obvious Berrick was the first choice.''

Cooper only featured in five Super Rugby fixtures for the Reds at the back end of the season after spending the majority of the campaign on the sidelines with a serious knee injury.

The New Zealand-born 10 tore his ACL at the start of the Bronze Medal win over Wales in the 2011 World Cup and only returned to action in mid-May.

He was hugely impressive in his first outing back with the Reds but went on to miss their knockout defeat to the Sharks after being suspended for a week for a dangerous tackle, ironically on Wallaby rival Barnes.